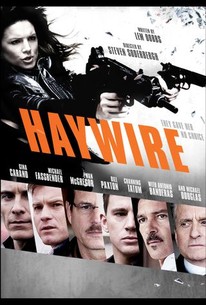 This dynamic action-thriller directed by Steven Soderbergh boasts a talented cast that includes Channing Tatum, Ewan McGregor, Michael Fassbender, Antonio Banderas, Bill Paxton, Michael Douglas, Michael Angarano; and introduces MMA superstar Gina Carano as Mallory Kane, in a demanding lead role that has her performing her own high-adrenaline stunts. Mallory Kane is a highly trained operative who works for a government security contractor in the dirtiest, most dangerous corners of the world. After successfully freeing a Chinese journalist held hostage, she is double crossed and left for dead by someone close to her in her own agency. Suddenly the target of skilled assassins who know her every move, Mallory must find the truth in order to stay alive. -- (C) Relativity Media

Mathieu Kassovitz
as Studer
View All

Dobbs and Soderbergh have a good feel for this genre, and seeing how things play out and watching Mallory exact her brutal, full-impact revenge is a total joy.

Carano is strong, fast, relentless. She's not much of an actress yet, but Soderbergh hides her weaknesses well...

There's a good deal of pleasure to be had in the clockwork precision of her hand-to-hand combat, which Soderbergh often shoots in profile to showcase her wall-climbing backflips.

Even in the midst fighting off a battalion of protective-gear-clad law enforcement officers, Carano has a businesslike confidence.

A more than decent alternate to the award yearning fare on offer at this time of year.

Just because Soderbergh's ambitions aren't as grand and sweeping here as elsewhere does not make the film worth any less.

What was Soderbergh thinking in making a work that gives a pass to the intelligence community?

Haywire is one of the best action films of the decade.

With such an authentic protagonist, the entertainment value is in her intrepid resolve.

A flawed film that still manages to entertain.

If you've ever wondered what Mission Impossible or Kill Bill would have been like if made by Soderbergh, now you have the answer. The fight scenes are pretty efficient but the formulaic plot holds no surprises, with irregular pacing and apathetic action scenes.

When a freelance black ops agent is betrayed by her employer she must evade capture by both the police and her erstwhile colleagues whilst tracking down the traitor to exact revenge. The plot to Haywire will never win any awards for originality but Steven Soderbergh's foray into Bourne territory is a nicely taut, no frills exercise in cold war style action that is a million miles from the glitz and bonhomie of the Ocean's franchise. He has clearly been watching the likes of From Russia With Love and Get Carter as the film has a very old school feel, with some bone crunching and brutal fight scenes. The striking but not implausibly beautiful Gina Carano is completely believable in her part as a tough as nails, no-nonsense she-Bond who is a coldly professional hard case who also happens to be a woman. The rest of the quality ensemble cast are also very solid, although I did feel that the unavoidably likeable Ewan McGregor was rather miscast in his part and Tatum appears and disappears again without warning and seemed only to be there as an excuse for some narrative flashbacks. These are relatively minor points though as Haywire is a quality post-Bourne thriller that harks back to Soderbergh's early career as cinematographer to the Coen brothers and is one of his better efforts of late.

Everyone is in this movie. Seriously. It's a fun ride, with enough twists and turns to keep me guessing.

What a pile of rubbish, it had a very odd pace, with long terrible music to go with the fight scenes that look scripted rather than a realistic look! It was boring and uninteresting!