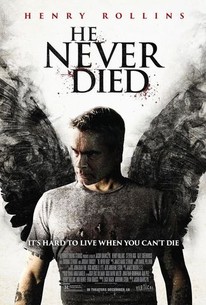 Jack's in a rut. Depression and severe anti-social behavior has whittled down his existence to sleeping and watching television. Seeing the human race as little more than meat with a pulse, Jack has no interest to bond with anyone. There's little purpose for him to make friends with someone he'd eventually eat or outlive by more than a millennia. The fuse is lit when Jack's past comes back to rattle him. Jack must now walk a tight rope of sobriety and try to eat as few people as possible in this violent tale of personal responsibility.

Jerry A. Ziler
as Thug

Xavier deGuzman
as Teenager #2
View All

Critic Reviews for He Never Died

You don't need to know anything about Henry Rollins to appreciate his tongue-noticeably-in-cheek action hero performance in horror/superhero genre hybrid "He Never Died."

"He Never Died" isn't as fleshed out as it could be, but what the film lacks in vivid supporting characters and rich plotting it gets back from Rollins, whose innate charisma carries the film.

In addition to his large head, Rollins, actor, writer and former frontman for the punk band Black Flag, brings a fine deadpan manner to his performance in "He Never Died."

Mr. Krawczyk never lapses into over-the-top horror parody, which too many others have done too often.

He Never Died is a Tootsie Pop of a movie. It has the outer shell of Taken ... but there's an altogether different treat in the center.

While He Never Died is hardly a comedy -- it's bloody and reflective, with a gloomy side that sometimes threatens to sink it -- these wry moments are central to its appeal.

It's an inspired, gruesome, violently funny and, at times, truly touching take on the subgenre.

It's a really interesting concept, it has great production value and he's a pretty kick-ass character so it's a good combination.

The super Rollins performance makes it worth watching.

He Never Died has more than enough blood splattering and bone crushing to keep the avid horror fan entertained, but it also has depth and a measured inclusion of genuine humour that may draw horror sceptics to its cause.

Many times, the 'less is more' approach to storytelling can really enhance a film and such is the case with Jason Krawczyk's He Never Died- a minimalist look at the life of a cannibal who also has been bestowed with the gift of eternal life.

The script injects a welcome dose of quirky humor, and Rollins gives an amusing understated performance.

Audience Reviews for He Never Died

I really, REALLY liked He Never Died. I know that I probably shouldn't have. There are a cornucopia of problems with it, the bulk of them directly related to its low budget. Though the answers we get at the climax of the film are fulfilling, I can't help but wonder if it would be better to just not have them? But either way, Henry Rollins absolutely convinced me of his unusual character, and though I don't know that I'll watch He Never Died again, I feel richer for the experience.

Interesting idea. Not sure it entirely works. Watched it free on Netflix and happy with that.

First things first, I gotta say that Henry Rollins was pretty much perfectly cast in this movie. I really do mean that. To be honest, there's only a couple of movies I recall seeing Rollins in, and I don't really even remember them that much. So I don't actually recall if he was good in any of them, but he is absolutely incredible here. Of course, it's not what one would call an Oscar-caliber performance, but I found him to accurately depict what the role of Jack was going for, which was for a quiet and anti-social, pushing everyone away for their own safety, since he is an immortal cannibal that has tried to refrain from consuming human flesh. I also gotta admit that Jack might be one of my favorite new characters in any film in recent memory. He's equal parts funny and terrifying. Well, you can see how he would be terrifying to the people that populate this universe. He's immortal, therefore, no matter what you do to him, he's not gonna die. With that said, however, it makes buying into Jack finding himself in dangerous situations a little hard to buy into, since you know nothing can be done to him. So that's why they involve his 19-year-old daughter, in order to at least give him something to fight for. And it's not even that he's doing it for her, he's doing it for himself, he even says so at the end when he goes to murder the guy that kidnapped her. So, it's not like Jack has a revelation about how much he loves his daughter. If you're expecting a sentimental father-daughter reunion, then you really are watching the wrong movie. And not to mention the fact that it would betray how Jack has been portrayed throughout the entire movie, he is an evil man, he's murdered 9-year-olds just for the hell of it and killed thousands just to watch them die. So this character should not have ever had a sentimental reconciliation with his daughter. Another point of intrigue in the film is what exactly Jack is and why he is immortal. There's the implication that he's a vampire, but he also says that he's Cain. Yes, the same Cain from the bible. So there's a lot of mystery regarding who he is and why exactly he's immortal. There's also this old guy with a hat that keeps following him at certain times in the film. Again, the implication being that this guy is the devil. So there's a lot of interesting elements that the film plays with and that, honestly, they don't always resolve. The thing about that is that there is a miniseries, which I really wanna see, planned that will serve as a sequel, so at least there will be some expansion of this universe, its characters and Jack's origins. So I'm looking forward to that, but I can understand how some people might be upset that they weren't given answers to everything. But, the way I see it, I think the film handled these unanswered questions in an intelligent manner. It gives the audience something to debate when the film is over. The film is really well-written. I found it to be funnier than any movie Adam Sandler has made in, seemingly, decades. It's got a dry wit, which is my style anyway. The cinematography is nothing special, but I can't complain about it because, again, it fits what the film is going for. It's not going for a bright and cheerful look, it's dealing with the seedier parts of town, so that's what it needed to look like. I can't really complain much about this movie honestly. It's a really well-written movie, it's got a great central character, Henry Rollins is fantastic and it does a great job at building up for the future miniseries. So, yea, I'd pretty much recommend this. It's a really damn good film.

Carried by Rollins and a script not afraid to laugh at itself, this incarnation of The Beast That Wouldn't Die is good simply because it is not impressed. Whatever you got, it doesn't care, an butt ugly cat, and that makes it good. Sure it could've been more fleshed out, but so what.