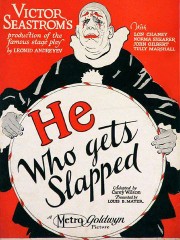 He Who Gets Slapped

He Who Gets Slapped Reviews

Andrey B
June 4, 2018
A very, very sad story, shot in the same vein, emphasizing the evil traits of human nature and its weaknesses towards the misery of the other. The film is backed with the strong Lon Chaney performance who was a true character actor of the silent period. The movie itself is, perhaps, the lesser Sjostrom, comparing to his other features, but still the hand of the master is all too familiar in the handling of morbid and heavy things.

Super Reviewer
Antonius B
March 5, 2018
Based on a play from Russian author Leonid Andreyev, 'He Who Gets Slapped' has some very dark themes - humiliation, adultery, betrayal, exploitation, and sadistic glee at someone else's expense. Lon Chaney stars as a scientist who early on suffers in two ways: his discoveries are stolen by his benefactor (Marc McDermott), and then his wife (Ruth King) tells him she's leaving him for the same scoundrel. Humiliated in public and private by being slapped and laughed at, he retreats from his life and takes up a career as a clown. His act? Being slapped and abused by 60 other clowns, much to the merriment of the audience. (Of course!)

It's a kind of ridiculous plot device to get him into this position, and then for his benefactor to cross paths with him five years later, but if you can suspend disbelief, you'll probably enjoy the film for its performances. You see some of the worst of human behavior shown in unflinching ways, and Chaney is the perfect guy for the part. He's fantastic, and to see him dressed up as a pathetic, bitter clown is something else. The film also includes Norma Shearer early in her career (just 22 years old); she plays a new performer to the circus. She begins having romantic feelings for her fellow horseman (John Gilbert), and there is a lovely scene of them out on a picnic, the charm of which helps lighten the tone of the movie. Shearer is so pretty that she also attracts Chaney (who we feel sorry for), and McDermott (who we hiss at). Love and self-sacrifice are the best of human behavior, and provide a counterbalance to the rest of the film.

Another aspect I found interesting was that it reminded me of a couple of Chaney's later films in the 1920's that I had seen before, both directed by Tod Browning. 'The Unknown' (1927) also takes place in a circus, and in one of its best scenes, features Chaney's horror and angst to being laughed at. 'Where East is East' (1929) also features 'murder by using a wild animal', though in that film, it was a gorilla, and here, it's a lion. It's interesting that these themes were recycled, and perhaps a testament to the power of their darkness.

David L
½ October 4, 2016
He Who Gets Slapped is disappointing in its supporting characters and a meandering second act, but the protagonist is excellent and so well played by terrific Lon Chaney, the dialogue is too on the nose, but the themes are important and interesting and some scenes are quite moving and heartbreaking.

Art S
½ March 3, 2016
Lon Chaney is absorbing and creepy as a wronged and humiliated scientist turned masochistic circus clown (yes, you read that correctly) in this early silent film from new studio MGM. Even behind his make-up Chaney burns with an intensity that lifts the movie beyond its revenge/love triangle plot. Swedish director Victor Sj—str—m (later the star of Bergman's Wild Strawberries) keeps things moving with deft editing and some odd set-pieces. For example, there is a recurring motif of a clown spinning a globe, no doubt reflecting the fickle vagaries of fate. Although things drag when Chaney is not on-screen and the movie shifts to Norma Shearer and John Gilbert professing their love (even while her father sells her to the wicked Baron, ironically the man who stole Chaney's scientific ideas and slapped him in the first place, in front of the Academy no less), the conclusion is effectively downbeat. If only the weird business of the slaps was foregrounded a bit more, this could have achieved greater cult status.

Joel A
August 13, 2015
A masterful thriller centering around a Professor who is betrayed by his closest friends and his major theories are stolen. He then approaches them publicly & he is slapped & humiliated.

Now redundant in his career he becomes a clown in the Paris Circus & plans revenge. As a relationship blossoms between the clown a circus girl so does an opportunity to have revenge.

Directed so well by Swedish Turned Hollywood Filmmaker Victor Seastrom for MGM in 1924. The themes explored in the film are fascinating & final moments in the film with a Lion are both tense & memorable.

Super Reviewer
Edgar C
½ September 3, 2014
"In the grim comedy of life, it has been wisely said that the last laugh is the best."

So speaks the straightforward opening statement, which immediately reminds me of something: Released along its superior counterpart The Last Laugh starring Emil Jannings, He Who Gets Slapped is Sj—str—m's second U.S. feature film after the very little famous and now partially lost Name the Man.

The legendary Lon Chaney is the central character used to rise some questions about the human nature to the surface while embodying other human virtues. "HE" is a martyr that is willing to sacrifice himself for others out of love. While being an idealistic personification, it is not an impossibly unrealistic one, like a symbol of any dignity left in the human heart. He was betrayed by a Baron since his scientific studies were stolen, so he is forced to start a new life, that's right, as a clown. As exaggerated as this may seem, this new occupation suits a purpose, and besides, the original argument is based on a highly regarded Russian play. It is one of the most hard-to-watch emotional and psychological character destructions cinema has offered, and yet one of the best, even if it doesn't reach the height of Janning's German films, including the overwhelmingly powerful Der Blaue Engel (1930).

The role of the clown is used to ask the audience what is it in human nature that makes people laugh at the physical, emotional or psychological humiliation of others. What is it that makes it an instrument of comedy that causes that involuntary reaction in us called laughter? However, that's the purpose of clowns through a generalized scope of society, up to the extent that "clown" is today used as a pejorative term. It turns out, however, the shocking truth that a clown can also have feelings. It is extraordinary the degree to which we can objectify a person because of a role he/she decides to assume. "I don't drink with clowns." These barons are even confusing entertainment acting roles with social strata!!!

So the clown role was also a good motor not only for making the life transformation of HE (Lon Chaney) all the more drastic, but also for transmitting suffering. The film makes the viewer intentionally suffer, which is a bold move, and even more considering the optimistic times of Hollywood's Golden Age. Of course, silent Hollywood was invaded by a shocking amount of renowned foreign names mainly from France, Germany and Sweden that became directors, being Sj—str—m one of them, so this allowed the Hollywood industry to acquire several perspectives for finally standardizing it to its classic melodramatic formula that respectfully emphasized family values during the 30s. So the 20s were a battlefield of thematic experimentation.

That also helped big names like Lon Chaney, Norma Shearer and John Gilbert to propel to stardom. They were already big by the time. However, Lon Chaney shines with an extraordinary, multifaceted performance as a frustrated scientist, social outcast, humiliated human being, and a laughing clown. He is truly extraordinary.

Finally, we have the unusually shocking definition of vengeance from Sj—str—m, not to say straightforward, which shouldn't surprise us since the vengeance dilemma that was present in A Man There Was (1917). The whole show acts as a tragic essay of human prejudices in modern society, making references to the entertainment industry and the criticisms that can come out of it. Sj—str—m brilliantly causes several emotions in the audience, perfectly timed independently from each other, like a truly complete emotional roller-coaster: indignation, anxiety, romance, comedy, suspense and sadness, in that order. His delivery of his ideas is unapologetic, which makes him a brave filmmaker that never hesitated to fully utilize the art form. Extremely recommended, very undervalued, He Who Gets Slapped is meant to move all hearts of the people who see it, with maybe one or two emotional slaps in the process!

Gio M
September 13, 2012
One of the finest silent films. Lon Chaney is wonderful in role of HE. Mr. Sjostrom was truly a masterful director. Unforgettable images from beginning to end.

Katie L
February 21, 2012
Not the best Lon Chaney film I've seen. He was great in it, but the movie was not very exciting.

Justin R
½ January 2, 2012
Fantastic silent melodrama. These mofos can act with their faces, no doubt!

Christopher S
September 28, 2011
Excellent silent dark circus melodrama featuring Lon Chaney at his very best. The surprising, almost gothic visuals - with its surrealist touches and moody cinematography - give the lurid story an extra operatic dimension. Easily among the best of its genre, a classic.

Ken T
September 14, 2011
Outstanding Chaney silent! Chaney stars as a scientist who is duped by a Baron who not only steals and takes credit for his ideas, but also nabs his wife. The Baron humiliates the scientist further by slapping him in front of his peers who in turn laugh at the poor man. The scientist takes it upon himself to become a circus clown and becomes HE - who gets slapped for audience amusement. But soon the new clown begins to fall in love again. Chaney is exceptional in the lead as HE and the direction from Swedish master Sjostrom is terrific. Norma Shearer plays Consuelo, a circus performer who attracts the attention of HE. A silent gem.

Charles P
August 17, 2011
If you hate clowns and want to see them get slapped, a lot, this is the film for you.

Ashley C
November 24, 2010
What could have been just another early melodrama is taken to a different level thanks to Chaney's tragic performance and some dark, dark sensibilities. Nice early use of some match fades. I'd rather have seen this in a theatre with a live pianist; the soundtrack Warners provided worked reasonably well, although the added applause, laughter, and lion roar (not giving too much away, I hope) sound effects got a little distracting.