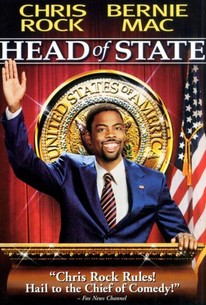 Mays Gilliam, a Washington D.C. neighborhood Alderman, is about to be redlined out of his job. But after the untimely death of the party frontrunner, Gilliam is plucked from obscurity, and thrust into the limelight as his party's nominee--for President of the United States. The players in Gilliam's life include: Mitch Gilliam, his unsophisticated older brother who becomes his running mate; Kim, his ex-girlfriend who had once dumped him, but who now has a sudden change of heart as she sees a chance at becoming First Lady; Martin Geller, his campaign manager; Lisa Clark, the woman who truly believes in Gilliam; and Debra Lassiter, the woman who doesn't have faith in his candidacy, and is serving as his reluctant advisor.

Nate Dogg
as Himself

Ron Harris
as Himself

Jeff Jarrett
as Himself

Ron Killings
as Himself

Delaney Williams
as Teamster No. 1

Wes Johnson
as Teamster No. 2

Gabrielle Goyette
as The Woman

Nancy Ding
as Voter on Street

H. Reneé
as Voter on Street

News & Interviews for Head of State

View All Head of State News

Critic Reviews for Head of State

But in his acting pursuits, Rock just doesn't do well. He's stiff and uncomfortable on camera, especially when it comes to romantic or emotional scenes.

[Rock] seems to think that expanding his critiques to feature-length form requires a cookie-cutter white southern governor as the enemy and lots of "bling bling" style as a positive counterpoint.

It's pretty much a toothless dog.

The satirical parts are sharp and funny while the broad comedy is banal and not funny. It makes for an insanely uneven movie.

The film is much like the wannabe candidate foiled by the primaries. You can't help but think what could have been, if only the movie had gotten off on the right foot.

Rock is a man who continues to perpetuate stereotypes for the price of "comedy" and continues making one terrible film after the other.

Chris Rock suffers from painful verbal constipation in this PG-13 clunker. Hollywood, make it NC-17 when Chris and Bernie run for re-election.

Although a reheated formula, Head of State dishes out a few original laughs due to in part to the writing of Chris Rock.

Audience Reviews for Head of State

This is a very funny satire of our political system and of black culture with the general premise being a black man is chosen to run for president by a white establishment that assumes he'll lose. Chris Rock plays Mays Gilliam, an alderman who finds himself running for President of The United States after the original presidential candidate dies in a plane crash two months before the election. Obviously, he is being set up to lose, but (of course) begins winning over the people and ultimately taking control of his fixed campaign with his street smart unorthodox methods. Bernie Mac plays Alderman's bail bondsman brother turned vice president running mate providing laughter with his rough and rumble ways. Robin Givens plays Gilliam's stalker ex-girlfriend.

Foreshadowing. Most Chris Rock-lead movies are terrible, this one is his best.

I'm so glad the studios ended up trusting Chris Rock to direct a movie. Man, he should run for President. Although he crosses the surrealism line a little too often for my tastes, this movie was a hilarious indictment of phoniness in American politicians. I have a little souvenir "Crib Malt Liquor" bottle in my room.

I know what your thinking, Chris Rock in a bad movie?