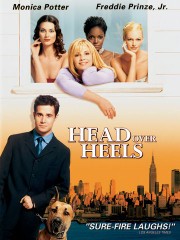 Lemon D
½ August 27, 2018
Simply awful, total CRAP-FEST...figurative and literal. Skip it. But if you must know, perhaps in order to learn how NOT to write, produce, direct, and cast a silly, gross rom-com for pre-pubescent girls, here's your chance.

Though filmed in 2001, it feels like 1980's CHEESE somehow (writer, director influence?). Why young, straight men with thin wallets and cheap suits would methodically lose their minds over tranny-looking, materialistic, learning disabled, egocentric, parasitical "models" is just plain silly (with waiting lists to interact, of course). However, these particular models could easily turn away mature, wealthy sugar-daddies like "Big" from TV's Sex and the City. Sure. They. Could. Professional models from that time period should be offended. Within minutes, you'll suffer from the atrocious content and delivery of dialogue, including one too many "jokes" about male dog humping, child molestation and pedo-lust, esp. in the Australian outback. Apparently the FOUR adult men who wrote, and the one who directed, this female-centric humdinger are desperately imagining what young girls want in a rom-com.

First, with NO LESS than five men creatively working on this movie, they managed to title it "Head Over Heels" when there is nary a reference to it. Perhaps they meant brains (head) over beauty (heels) with the whole models versus art restorer, but all the young ladies were inanely helpless in their own way. A title of "Weak in the Knees" would have made more sense, since this problem was portrayed ad nauseam. The acting is like a high school play, the main actress appears too "maternal" next to the miscast "professional" male lead who looks to be a college boy. Saving grace: one of the writers had a deep moment, so the male character uses an asthma inhaler, so as to be flawed...OR pulmonary disorders are funny to address during action scenes?

In the end, somebody cast two leads who inspire an odd-couple with "ick" factor, along the lines of brother and sister shenanigans...but then they kiss/have sex with absolutely no chemistry or sweat. While there's no revealing nudity, the fake heavy breathing does what it can on the sofa or when weak in the knees. The overly moody, weepy, bumbling, stuttering, supposedly intelligent art-restorer is ridiculous and completely helpless until the end. She's likened to three little, old ladies coworkers who apparently have no life, or no one to love, outside of the art and their cats...so she's supposedly doomed without things like artificially enhanced beauty, superficial relationships with either gender, and lots of attention to your own needs. Like a junior high girl's idea of the "grown-up" world.

The ridiculous plot is further enhanced by senseless, misplaced TOILET humor....literal poop, farts, and all. Yes, juvenile and gross. Inexplicably, the music generally made the visuals feel even more disingenuous. Unless you're a 12-year-old girl, this film will seem beyond juvenile, but fairly harmless in its fake world of romantic art, goofy spies/commies, romantic boys trying to be men, cheer-section roommates, gross-out gags & dirty jokes, and the "grown-up" world of adults that seems campy. The movie's stereotyped, masculine, dumb-as-rocks models - that inadvertently become heroes, of course - are the last bastion of what every girl was shown a supermodel could be (minus anorexia & heroin use in this PG-13) ...before those somewhat unfair stereotypes were wiped out when real-world "models" finally found expression ad refuge on Instagram with the other millions (aka: unemployed narcissists with duck-lips).

anonymous_user
½ September 15, 2017
As far as to address the Critics Consensus, I didn't think it was a huge mess, I didn't think the plot or jokes were idiotic, and I didn't think the toilet humor was gratuitous, or more gross than funny. There are two scenes that could be considered "gross", but only because they take place in the bathroom. It wasn't too much that it was gross to me, though, and then I also found it them funny! But, this is a pretty good movie, at least I think! It's from the director of Mean Girls, and the Freaky Friday remake! I thought this was pretty well directed, and that he did the jokes well. I thought it was pretty funny too, with a few laugh out loud scenes. I thought Freddie Prinze Jr. gave one of his best performances! I'm not gonna going to say anything else, to keep this review short. But, I will say, that by the end, I was loving it, and seeing a huge amount of re-watch value! I'd recommend this to most anyone, but specifics could include fans of Mark Waters' work, or Freddie Prinze Jr. fans! I had a third/kinda kind of fourth specific, but it was a an unspecific one/ones, and just a joke!

Rob M
September 3, 2017
A romantic comedy with a Hitchcockian twist. This premise sound interesting and truly should be, but unfortunately, it wastes its time on toilet humor which is far grosser than it is funny. Monica Potter is an art curator who move into an apartment full of models with a view to an attractive businessman (Freddie Prinze, Jr.) who Potter spies on throughout the day and eventually sees something highly questionable. She and her model roommates try to solve the mystery surrounding Prinze with ill-timed pratfalls and ridiculous scenarios. It's too bad because Potter and Prinze are very charming and the fact that they were given roles that seemed tailor-suited to them makes it all that much more disappointing to see it wasted in such an egregious fashion.

Katherine B
June 2, 2017
Cute movie! If you don't take this movie too serious it's a good movie. It's ridiculous at times, but very charming.

Edward C
½ September 16, 2016
Head Over Heels(2001)
Starring: Monica Potter, Freddie Prinze JR., Shalom Harlow, Ivana Mili?evi? , Sarah Murdoch, Tomiko Fraser, China Chow, Stanley DeSantis, Erin-Marie Dykeman, James Kirk, Elysa Hogg, Kristina Lewis, Ben Silverman, Sam MacMillan, and Jay Brazeau
Directed By: Mark Waters
Review
UNLEASH YOUR INNER MODEL.
Head Over Heels opens with fifteen funny minutes and then goes dead in the water. It's like they sent the first team of screenwriters home and brought in Beavis and Butthead. The movie starts out with smart and edgy zingers, switches them off, and turns to bathroom humor. And not funny bathroom, but painfully phony gas-passing noises, followed by a plumbing emergencies that buries three supermodels in a putrid delivery from where the sun don't shine. It's as if the production was a fight to the death between bright people with a sense of humor and cretins who think the audience are as stupid as they are.
Monica Potter and Freddie Prinze Jr. star in another one of those stories where it's love at first sight and then she gets the notion he's clubbed someone to death. The two actors were doing perfectly well being funny as themselves and then the movie muzzles them and brings in this pea-brained auto-pilot plot involving mistaken identities, dead bodies, and the Russian Mafia.
Why? I wanted to ask the filmmakers. Why? You have a terrific cast and wit to start out well. Why surrender and sell out? Isn't it better bet for your careers, to make a whole movie that's smart and funny, instead of showing off for fifteen minutes and then descending to cynicism and stupidity? Why not make a movie you can show to your friends you admire, instead of a test audience scrapped from the bottom of IQ barrel?
Monica Potter is radiant as Amanda, an art restorer at the Museum of modern art. She has been betrayed by a boyfriend, and vows to on her job. "I love art better then real life" she says, because the people in paintings "stay In love forever." True of the Grecian Urn perhaps, if not of Bosch, but never mind, her latest challenge is to restore a priceless Titan, which the curator hauls into the room with his fingers all over the paint, banging against the doorway.
In a film with more confidence, the comedy would continue to be based on the relationship. This one prefers to recycle aged clichés. She thinks she sees him club someone to death. We know he didn't because (a) it happens behind a silhouette, so the movie is hiding something, (b) Freddie Prinze Jr. is not going to play a real club murder, not in a movie with a cute dog. Idiot plot devices prevent either one of them from saying the two or three words that would clear up the misunderstanding. Meanwhile the exhausted screenwriters haul in the Russian Mafia and other sinister characters in order to make this movie as similar as possible to countless other brain-dead productions. Head Over Heels would be funny if it were about the people making this movie. I give it a one and a half out of five.

Galileo H
January 30, 2016
These critics need to lighten up. A lot
This was funny and goofy. It wasn't supposed to be some comedic masterpiece.

Kirsty M
½ September 20, 2014
Why all the hate?.. I was obsessed with this film when I was a teen. To be fair it was during my Freddie Prince Jr faze.. but... don't think it is too terrible.

RB S
August 9, 2014
total guilty pleasure, but so worth it for Ivana Milicevic as the Russian model.