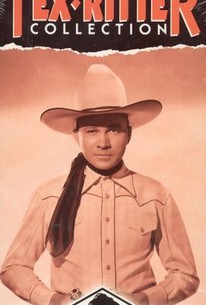 In his second "Range Rider" music Western for poverty row newcomer Grand National, Tex Ritter played Tex Saunders, the troubadour brother of the sheriff (Forrest Taylor) of Rio Grande, Texas. When Tex and sidekick Chilo (Syd Saylor) on behalf of Laurie Hart (Eleanor Stewart) begin to look into what appears to be a gangster-style protection racket, saloon-owner Ike Travis (Warner Richmond) has the troubadour framed for killing bandit Red Dugan (James Mason). An angry populace demand an arrest and Tex is saved in the nick of time from being lynched. Outriding the posse, Tex manages the round up the racketeers, including the real killer.Headin' for the Rio Grande was filmed for around $8000 at Hollywood's Talisman studios and at the Monogram ranch near Placerita,, California. Ritter, who was under a personal contract to producer Edward Finney and not Grand National, earned a flat fee of $2000 for each of his Westerns. Reportedly, Ritter convinced Grand National to hire silent clown Snub Pollard for a small supporting role, having admired Pollard's silent slapstick comedies as a child in East Texas. Pollard would return in later films as Ritter's comic sidekick. In his first of 25 appearances opposite Ritter, veteran Bad Guy Charles King played one of the villain's henchmen. "I must have killed old Charlie King at least twenty times," Ritter would later reminisce. "Usually behind the same rock."

Rudy Sooter
as Townsman
View All

Critic Reviews for Headin' for the Rio Grande

There are no critic reviews yet for Headin' for the Rio Grande. Keep checking Rotten Tomatoes for updates!

There are no featured reviews for Headin' for the Rio Grande at this time.

Headin' for the Rio Grande Quotes