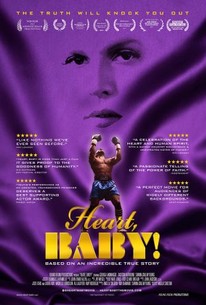 In the 1970s George Lee Martin was sentenced to 40 years in prison for armed robbery. At just barely 18 years old he was sent to one of the toughest, most violent prisons in Tennessee. Inside, George took up boxing as a release and soon proved unbeatable, knocking out up to six guys a day. He became the star of the prison's Friday Night Fights where the wardens would share their best fighters across Tennessee. Word spread beyond the prison walls to Freeworld coaches who began to bring their champions in to fight George. George knocked them all out, including the former U.S. heavyweight champion of the world, John Tate, in under a minute. In 1984 the U.S. Olympic team offered George the ultimate opportunity, his freedom in exchange for a place on the Olympic team to win gold for his country. George refused to go. Heart, Baby! tells the remarkable true story of George Lee Martin, and why he turned down freedom, fame and glory for something far bigger.

Wayne Pére
as Abraham
View All

There are no critic reviews yet for Heart, Baby!. Keep checking Rotten Tomatoes for updates!

There are no featured audience reviews yet. Click the link below to see what others say about Heart, Baby!!