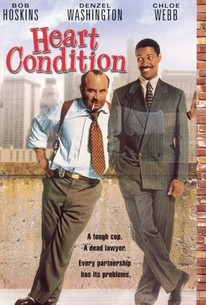 Jack Moony (Bob Hoskins) is a vice detective, but he is also an intense and crazed, racist lout. Jack has had a brief fling with a hooker named Crystal (Chloe Webb), but Crystal left him for Napoleon Stone (Denzel Washington), a suave, handsome, cosmopolitan lawyer, who becomes the object of Jack's rage, not simply because he has stolen his girl but also because he is black. Jack, who lives on cheeseburgers, beer, and whiskey, has a heart attack. This occurs the same night that Stone is killed in an un-accidental car crash. Thanks to a quick organ transplant, Jake ends up with Stone's heart. But to Jack's horror, he discovers the ghost of the lawyer has returned to earth to follow Jack around -- offering Jack nutritional advise, giving him tips on solving his murder, and suggestions on how to get back together with Crystal.

Billy Oscar
as Man in Bathroom

Johnny Walker
as Cop in Precinct

Chick Hearn
as Himself

The movie seems over a good half-hour before it ends and is forgotten even more quickly.

The movie is all over the map, trying whatever seems to work at the moment.

The film is caught somewhere between seriousness and cheesy exploitation.

A casually racist murder-mystery (minus the mystery) that was rejected by both audiences and critics due to a chaotic tone, insipid comedy beats and clunky action scenes set to slap-bass and scat-singing.

A schizophrenic film that is never funny, never insightful and often annoying.

I saw this movie a long time ago and can still remember the story. The story is about a racist cop (Bob Hoskins) who gets a heart transplant from a black guy. The black guy (Denzel Washington) then appears as a ghost in the cop's life. The ghost wants the cop to take down the guys who killed him. I remember this movie as very entertaining and different from what I was used watching.

Silly but still a great film for a daft saturday afternoon

Talk about a fun time. An endlessly enjoyable and excting movie. Bob Hoskins and Denzel Washington are excellent, they make a charming, teriffic and funny buddy team.

A moderately entertaining piece of nothing, with Bob Hoskins, a bigoted cop who has a black heart transplanted into him and then has to solve a crime with the donor's ghost.