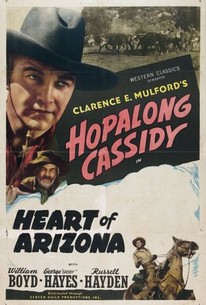 Heart of Arizona is an average Hopalong Cassidy western buoyed by the believable performances of stars William Boyd (Hoppy), George "Gabby" Hayes (Windy) and Russell Hayden (Lucky). Natalie Morehead heads the supporting cast as notorious female outlaw Belle Starr, released from prison after a five-year stretch on a trumped-up charge. The local sheriff refuses to believe that Belle has reformed, but Hoppy champions her cause and helps her to stand up against the film's real villain, a rustler named Twister (Leo MacMahon). Dorothy Short, best known as the murdered pot-smoker in Reefer Madness, appears as Belle Starr's fictional daughter Jacqueline. A unexpectedly doleful ending caps this 15th entry in the "Cassidy" series.

Critic Reviews for Heart of Arizona

There are no critic reviews yet for Heart of Arizona. Keep checking Rotten Tomatoes for updates!

There are no featured reviews for Heart of Arizona at this time.