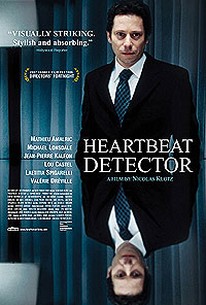 Critics Consensus: Gripping and provocative psychological thriller about corporate responsibility remains tense throughout and despite its long running time.

Critics Consensus: Gripping and provocative psychological thriller about corporate responsibility remains tense throughout and despite its long running time.

Critic Consensus: Gripping and provocative psychological thriller about corporate responsibility remains tense throughout and despite its long running time.

As a Parisian petrochemical company forges on into the 21st century, the in-house human resources psychologist leads a probe that proves the ghosts of the previous century still hold sway over current events in director Nicolas Klotz's labyrinthine drama. Simon (Mathieu Amalric) is a human resources worker who has spent the last seven years working at the Paris branch of a powerful German-based company called SC Farb. In addition to assessing the hiring and firing practices of the company, Simon was also charged with the task of conducting motivational workshops. When Assistant Director Karl Rose (Jean-Pierre Kalfon) implores Simon to conduct a clandestine assessment of firm director Mathias Jüst's (Michael Lonsdale) mental health after rumors of erratic behavior begin to circulate in the German head office, the shrewd human resources worker forms a factory orchestra as a means of stealthily gauging the stability of his violin-playing subject. Later, a comprehensive investigation of company archives and anonymous letters begin to snake ominously back in time to the darkest days of World War II.

There's no killer revelation, just a graceful telescoping of past into present and a steadily accumulating dread.

Heartbeat Detector works on so many levels at once that its power is difficult to capture.

As driven by linguistics and euphemism as this film is, it's also a slippery and wonderfully acted drama%u2014Michael Clayton with a far more troubling moral landscape.

A searing indictment of corporate responsibility that will intrigue conspiracy theorists.

Though it is in part a stinging commentary on the soullessness of the corporate suit, Nicolas Klotz's film is extremely slow to get on track.

Heartbeat Detector earns its points, arriving at a potent conclusion with a stealth and meticulousness that knocks the wind out of you.

Cold and intellectual philosophical exposé of how European capitalism developed out of fascism through a mystery story of "corporate soldiers" intrigue.

At just under two-and-a-half hours, the movie is a horrible bore.

An intriguing thriller with strong performances and a dense, complex script.

A confronting examination of human evil in all its enduring banality, Heartbeat Detector takes a crooked path towards its bid for some straight talking.

Heartbeat Detector doesn't really unfold; when it doesn't drag, it lurches about in fits and starts

A cinematic flatliner that was dead on arrival.

It's easy to paint all of nazi germany as sadistic monsters, ripping the heads off of babies and throwing them into ovens, but the truth is a little more disturbing. We must rationalize and demonize in order to cope with the fact that some of these monsters, these murderers, were little more than bureaucrats performing a grotesque but necessary function in order to make society a "better" place. While nazism had roots in mysticism and the occult, it also arose out of intellectual pursuits in genetics and socialism. The purpose of weeding out "inferior" gene pools of the jews, mentally ill, gypsies, etc. was to make the human race as a whole more strong. In this society, the individual was unimportant, only the propagation of the species. The idea that some of us are the "master race" while others are a "sub-species", while primitive pseudo-science, could be swallowed by a lot of people with the right motivators in place (and a master orator like Hitler to feed it to them). It's not enough, especially in hindsight, to recognize something as evil, whether it be a movement or idea, we have to understand how evil rises out of something benign. "Heartbeat Detector" (also known as " La question humaine") centers around a corporate psychologist who, while extremely efficient in stream-lining the corporation, has suddenly found himself surrounded by executives with nazi connections. Granted, firing someone from a job is in no way equivilent to murdering them in a holocaust, but the methods and terminology of the business world are eerily similar to that of the nazis. Referring to men as numbers, it's easier to terminate them if they can be somehow dehumanized. Is there something intrinsically evil in trying to increase the "greater good" by eliminating the lesser and weaker members of an organization? Maybe Heartbeat Detector tries to make that connection, but one can always get another job if one is fired from a business for issues one has created for oneself. Being fired for being lazy isn't the same as being murdered for being born the wrong religion or race. It is an intriguing concept, however. Heartbeat detector is an interesting, thought-provoking film that challenges the notion of innocence or guilt when it comes to committing evil deeds.

[font=Century Gothic]In "Heartbeat Detector," Simon Kessler(Mathieu Amalric) is a psychologist working for a French subsidiary of a German company that has fired half of its workforce in the past year. So, it is no surprise that he has taken a personal interest in the remaining workers as he romantically juggles two colleagues, Louisa(Laetitia Spigarelli) and Isabelle(Delphine Chuillot). In addition to Kessler's normal responsibilities of judging applicants and running boot camps for junior executives, he is assigned by Karl Rose(Jean-Pierre Kalfon) to examine the CEO Mathias Just(Michael Lonsdale) in order to see if he is still mentally fit for duty.[/font] [font=Century Gothic][/font] [font=Century Gothic]"Heartbeat Detector" is a ponderous, long and nearly indecipherable movie that almost gets to the halfway point before it drops its big revelation. At which point, it turns into a game of he said, he said. While there is some good stuff here on how capitalism is built on the suffering of others and finding the right language to cover its tracks, the example used is an extreme one, even if it is inspired by a true story.[/font]