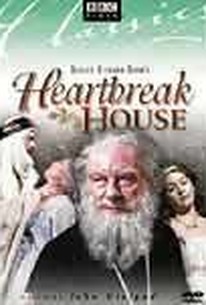 The 1977 BBC feature adaptation of George Bernard Shaw's 1919 theatrical opus Heartbreak House can be relished again and again in this home video release. A response to the First World War, the play dramatizes Captain Shotover's weekend party at his Sussex estate for his two daughters and their freewheeling artiste friends, including such indelible characters as Boss Mangan, Ellie Dunn and Hector Hushabye. The narrative explores the various romantic attachments that form and dissolve over the course of a few days. Heartbreak represents a defiant call to the audience, Shaw demanding (through the drama) that viewers step back to reestimate and reevaluate how they live and which life-priorities are most important. Directed by Cedric Messina, the '77 miniseries stars such legends as Sir John Gielgud, Lesley Anne-Down and Daniel Massey. ~ Nathan Southern, Rovi

There are no critic reviews yet for Heartbreak House. Keep checking Rotten Tomatoes for updates!

There are no featured reviews for Heartbreak House at this time.