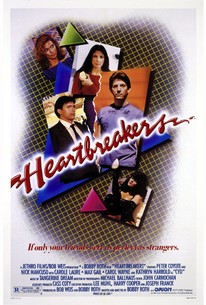 Los Angeles is the playing field for producer/ writer/ director Bobby Roth's Heartbreakers. Peter Coyote and Nick Mancusco play a couple of thirty-something holdovers from the 1960s. Coyote is an artist specializing in S&M poses, while Mancusco is heir apparent to a large garment-manufacturing firm. Curiously, it is the hedonistic Coyote who desires a lasting relationship with a woman, while the "conservative" Mancusco is dedicated to the proposition of one-night stands. Carol Laure and Carol Wayne are the ladies who strain Coyote and Mancuso's friendship--and in so doing, force both arrested adolescents to do some growing up.

How interesting is childishness in grown men? Less than Bobby Roth thinks. Yet Roth brings a natural filmmaker's intensity to the material. When I play this movie over in my head, I laugh at it, but I'm still enjoying it, too.

The people in this movie might seem glamorous if you glimpsed just a small corner of their lives. But Heartbreakers sees them whole, and mercilessly.

A perceptive buddy film about thirtysomethings learning they are no longer boys and have to face the pitfalls of growing up.

A provocative comedy of manners

There are no featured audience reviews yet. Click the link below to see what others say about Heartbreakers!