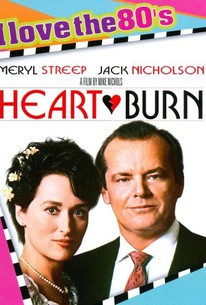 Critics Consensus: Despite an astonishing collection of talent across the board, Heartburn's aimless plot inspires mild indigestion instead of romantic ardor.

Critics Consensus: Despite an astonishing collection of talent across the board, Heartburn's aimless plot inspires mild indigestion instead of romantic ardor.

Critic Consensus: Despite an astonishing collection of talent across the board, Heartburn's aimless plot inspires mild indigestion instead of romantic ardor.

Though she always played coy about the fact in interviews, Nora Ephron's novel Heartburn is a thinly disguised "à clef" rehash of her marriage to Washington Post reporter Carl Bernstein. Meryl Streep plays Rachel, an influential food critic who marries charismatic columnist Mark (Jack Nicholson) after a whirlwind courtship. Warned that Mark is constitutionally incapable of settling down with any one woman, Rachel gives up her own job to make certain that her marriage works. When Rachel announces that she's pregnant, Mark virtually jumps out of his skin with delight. But as the news sinks in, Mark chafes at the impending responsibilities of fatherhood, and the philandering begins -- as if it had ever really stopped! Our favorite scene: Rachel and her friends being robbed at her therapy group -- that's Kevin Spacey as the robber, in his film debut. Meryl Streep's real-life child Mamie Gummer also appeared in the film as Rachel's daughter.

May Pang
as Dinner-Party Guest

Michael Regan
as Father of the Bride

Luther Rucker
as Workman
View All

What's profound about it is its intimacy. You feel as if you were there, and it happened to you, and its heroism, the heroism of everyday life, is yours.

This is the most disappointing film of the year, considering its pedigree -- a Mike Nichols film from a Nora Ephron script, starring Meryl Streep and Jack Nicholson.

Unlike the babies that [Meryl Streep] carries convincingly through Rachel's pregnancies, the story has little weight.

Here and there, we see glimmers of the greatness of both Nicholson and Streep... Those moments are adrift in a sea of ennui.

Heartburn is another example of the crisis American cinema is undergoing. [Full Review in Spanish]

Despite engaging performances by Meryl Streep and Jack Nicholson, the screen adaptation of Nora Ephron's popular novel is shallow and wan.

I really enjoyed Heartburn, despite the fact that the storyline seemed to go nowhere. I wouldn't have wanted to miss Meryl Streep's performance for anything.

The food-sex jokes come off half-baked.

Decently (but no more) acted by Meryl Streep and Jack Nicholson, this marriage on the rocks melodrama, based on Nora Ephron's memoir, is ultimately shallow and verbose.

Grabs you by the heart and doesn't let go

Norah Ephron's book launched this film, which tackles the tricky subject of infidelity without much complexity. The film covers the emotional rollercoaster that was Ephron's second marriage, using stand-ins Meryl Streep and Jack Nicholson. Most of the film is about their relationship, its beginnings, and the machinations of their life together. Near the end we actually get to the issues of the marriage, i.e. the infidelity on the part of Mark (Nicholson). The message of the film is that you shouldn't be with someone who doesn't respect you. What makes this lukewarm is that Mark's point of view is never expressed, and it's very one sided. Rachel (Streep) runs off, but is filled with regret as she is a single mother, and very pregnant. It seems like she only wants Mark to race after her, as she waits for him to call or send flowers, neither of which he does. The ending remains anticlimactic because Rachel doesn't really learn anything that isn't easy for her to reach. She just stops acting needy and changes her mind. It doesn't say anything bigger than "cheating is bad" and that's a message that has already been hammered to death, in much better films that include abuse and dependency. Without any complexity or understanding of this marriage as a whole, it's too easy an ending, and not worth the watch.

The marriage between a columnist and his wife degrades when she discovers his infidelity. Nora Ephron makes me hate white people. These two privileges, upper-class, yuppie white people smack of the kind of white sense of entitlement that would make me turn into Malcolm X. Thinking about Ephron's films, I can't remember a single non-white character who isn't carrying a tray or, as is the case in this film, saying, "Meesus Forman" in a caricature of a Hispanic maid; her main complaint about Rachel nemesis in the film is that she's "messy," as though the only way this woman can evaluate one's character is through her work. Now, I suppose you're saying that since race isn't a concern for Ephron, it's unfair to bring it up, or you're saying that Woody Allen has only one African American character in his entire oeuvre (Cookie from Deconstructing Harry) who merely serves to set up a racist joke. It's true that Ephron isn't writing about race, but it's nonetheless inappropriate to have the only depiction of nonwhites in subservient roles; if race isn't one of Ephron's concerns, then don't include any nonwhites in any role; have a white maid. Eliding nonwhites seems less offensive to me than confining nonwhites. And I admit one of Woody Allen's weaknesses is his single-color pallet, but in his entire film collection, there is only one instance where a nonwhite is confined to a subservient role, and this a non-speaking maid in Hannah and Her Sisters. As racist depictions go, Allen's not good, but Ephron is horrid. The detestable depiction of race in Heartburn isn't the only thing that bothered me about the film. The conflict literally doesn't start until the film is forty-seven minutes old. For an eternity, we have to watch these yuppies be unpardonably happy with their courtship, their child, and their seemingly insouciant ability to get over their fears of marriage and commitment - serious fears that are glossed over and defeated with some simple spooning. It's so boring in a way that only the overly saccharine Ephron can bore one. The half-star bonus point is for Jack Nicholson who has some good moments and for one scene with a jewelry salesman that was well-written. Overall, after Julie and Julia and Bewitched, one would think that I'd learn my lesson.

Bittersweet comic drama that knowing the actual background inspiration is at times uncomfortable to watch. Nicholson is fine but Meryl's is the performance that really stands out. A high quality supporting cast however isn't really put to good enough use.

I think I would rather cut my ear off than watch this movie ever again. While technically a good film, it has been a long time since I loathed two characters in a movie so much. The plot is basically smug, whingey, whiney 30 something (who dresses more like 40 something. Sooo frumpy all the way through this) marries womaniser, thinking of course that she is different and can change him. Oddly enough, he is soon cheating again (what a shocker). I found Meryl Streep's Rachel so unpleasant I really felt very little sympathy for her. Ditto Jack Nicholson's Mark - I don't think he was even meant to be likeable. It was just little things like her complete lack of manners anytime she was being served in a shop (right down to final scene with obnoxious child who looks like a female Chucky. Yes, that's just what I would hope to be stuck next to on a plane). Just the most self observed character ever. And this is supposedly a true story. Heaven forbid.