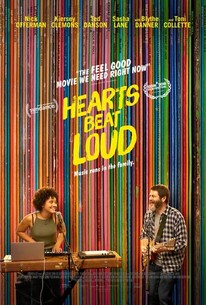 Widower and aging Brooklyn hipster Frank starts a band with his teenage daughter Sam just before she leaves home to attend college in California. When a song of theirs finds success online, it complicates Frank's attempts to let go of his dreams of stardom and allow his daughter to find her own path in life.

Offerman holds it all together with a performance as powerful as it is quiet.

Anyone who's written a song knows how much heart is poured across the sheet; Hearts Beat Loud actualizes that "overflowing of spontaneous emotion."

Hearts Beat Loud is a light, enjoyable film that washes over you - though perhaps doesn't linger in the mind long after the credits roll.

Offerman puts in a subtle turn beneath his humongous ageing-hipster beard and Clemons is deliciously natural as the exasperated Sam.

A slice of pure cinematic joy with Offerman and Clemons on top form.

It's remarkable just how grating this perkily inoffensive premise manages to be.

...a lesser Band-Aid, that every fan of Eighth Grade should see...

When Sam and Frank are jamming together, the movie soars.

Hearts Beat Loud is one of the warmest films I've seen in a long time and one of the best of 2018.

An intimate and comfortingly familiar tale that hits the right notes, just so long as you can live with a low-key ditty and don't expect any sweeping crescendo.

Great film that showcases Offerman and Clemons unlike any other film. They are impressive and the talent filmmaker Brett Haley provides them with a film with depth and great support. Indie cinema was a little quiet this year, but Hearts Beat Loud is a great addition and deserves all the attention it will garner, it is not very often a film this interesting garners great reviews and audience appeal. This is indie cinema at its best and another reason why audiences and streaming services need to assist with keeping this genre alive. 24/12/2018.

This is the definition of fulfilling. Meaning, it effortlessly satisfies and rouses feelings of happiness due to the fact it fully develops its character and, in this case, accentuates their musical abilities. Hearts Beat Loud moves beyond the music though, and the irresistibly charming cast of Nick Offerman, Toni Colette, Kiersey Clemons, and Sasha Lane lend what could have otherwise been little more than a generic feel-good flick about the many phases of life and dealing with change more so; it doesn't hurt the music is pretty good too, but watching Offerman and Clemons play it together is the real treat. Wholly satisfying.

Nothing you haven't seen before in the teen, coming-of-age drama/family relationship genre. In spite of that the performances by Clemons and Offerman are good enough to elevate this film above the formula, and create a dramedy that tugs at the heartstrings.

As much as I dislike the fact that great movies go under the radar, I also love not hearing about a movie and then coming across it, only to discover a "hidden treasure" (so to speak). I've always been a sucker for movies that revolve around characters who love music and give their life experiences through their songs because I feel like it's a unique way to build your characters. That may be a personal bias, but I still believe that this is a movie that may appeal to a wider audience than the filmmakers may have originally thought. Hearts Beat Loud is now available to stream and purchase, but upon discovering it, I felt the need to express my feelings toward it. I do feel the potential for awards here, but I don't believe you should hold your breath on that. This is just a very well put together dramedy that I can't recommend enough. College is on the horizon for young Sam (Kiersey Clemons) and her father Frank (Nick Offerman) is on the verge of losing his record store. Being the fantastic singer that she is, Sam impresses her father by performing a song that she wrote herself. Being in a failed band in the past, he quickly jumps on the fact that they could form a duo and possibly make hit music together. Slowly forming a bond through the summer that neither one of them would have predicted, their story alone makes Hearts Beat Loud worth watching. With many secondary stories to only deepen the emotional core of this family, I found myself enthralled in the drama of this movie from beginning to end. On top of great characters, having Nick Offerman and Kiersey Clemons as your lead characters doesn't hurt either. Aside from her breakout role in Dope (which was fantastic), I haven't had the chance to fully appreciate her as a leading lady in a film, until now. She clearly has a bright future ahead of her and I can't wait to see where her career takes her next. That being said, Nick Offerman has always impressed me, so it was no surprise that he was my absolute favourite portion of this film. Dealing with much loss throughout his life and struggling financially to boot, his character needs to feel broken. The way that Offerman gives this character a sense of humour while also feeling incredibly genuine was a breath of fresh air. Where this film will hook you or lose you is in its musical tastes. The finale of this movie leans very heavily on the performances of the lead characters and the music they've created together, so if you can't follow the lyrics or just don't care for the music they're playing, then you may not feel the emotional impact of the conclusion to this film, but I personally was completely engaged and loved every second of it. The way they use music to tell certain portions of this story was very well done and I have to commend a movie that does that. In the end, Hearts Beat Loud is directed with care by Brett Haley. One of my favourite films of 2015 was I'll See You in My Dreams, not for how incredible the story itself was, but by how much care was put into placing you into the movie's world. This is a filmmaker who chooses specific points in characters' lives and focuses in on that while reflecting on their past throughout the course of the films. I love this style of storytelling and it's once again present in Hearts Beat Loud. Aside from viewers maybe not enjoying the music itself, this is a film that cares about its characters from beginning to end, and for that reason alone, I don't have any complaints. I loved this movie.