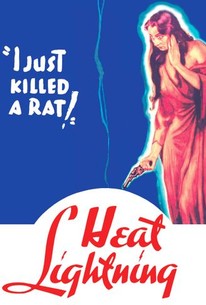 An interesting precursor to such films as The Petrified Forest and Bus Stop, Heat Lightning takes place in a remote California-desert gas station-café. Several strange characters pass through the establishment's portals during one fateful 24-hour period, including cad-and-bounder George (Preston S. Foster). Resourceful proprietress Olga (Aline MacMahon) tries to remain detached throughout but is forced to take drastic action when George threatens to seduce and abandon her own sister Myra (Ann Dvorak). Glenda Farrell, one of Warners' most reliable players, is surprisingly wasted in a glorified bit role; even further down the cast list as "Husband and Wife" are 2-reel comedy star Edgar Kennedy and future Oscar winner Jane Darwell (talk about an odd couple!) Heat Lightning was based on a stage play co-scripted by George Abbott.

Frank McHugh
as Frank the Chauffeur

Harry C. Bradley
as The Man

James Durkin
as The Sheriff

Jane Darwell
as The Wife

Edgar Kennedy
as The Husband

Muriel Evans
as The Blonde

Eddie Shubert
as Man
View All

The proletarian era at Warner Bros. was still in full swing when Mervyn LeRoy directed this crackling 1934 adaptation of a play by Leon Abrams and George Abbott.

The ambitious plot line is as satisfying as drinking Coca-Cola in the desert to quench one's thirst.

There are no featured audience reviews yet. Click the link below to see what others say about Heat Lightning!