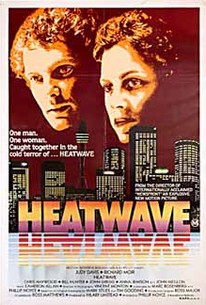 Heatwave is the mildly interesting story of a woman's attempt to stop a redevelopment plot which she thought was the cover-up for fraud and other criminal activity. Kate (Judy Davis), through her own efforts, manages to find some evidence to support her claims and also have a romance. Davis gives an energetic performance as the crusading woman, but the script lacks a convincing plot or characters. While it has some good moments, Heatwave is primarily notable because it was one of the earlier efforts of Australian director Phillip Noyce, who went on to make the very exciting Dead Calm. ~ Linda Rasmussen, Rovi

In this remastered (with 5.1 DD sound) version of Phillip Noyce's second feature, with a lot of the background dialogue cleared out to ensure greater clarity for the story, we are reminded what a terrific and natural filmmaker he was from the beginning.

There are no featured reviews for Heatwave at this time.