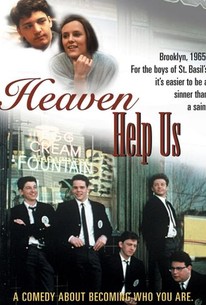 Charles Purpura scribed this semi-autobiographical tale about his experiences in a Brooklyn Catholic school of 1965. The film focuses on several Catholic school boys who get into ever increasing amounts of trouble with the presiding priests of the Catholic school, St. Basil's. Andrew McCarthy plays Michael Dunn, a newly arrived student who latches onto the class egghead Caesar (Malcolm Danare), who is constantly picked on by the class bully Rooney (Kevin Dillon). Rooney intimidates Michael and Caesar to become his erstwhile chums and, along with a few other quiet students, they receive corporal punishment for minor infractions, disrupting communion and confession and, ultimately, their antics inspire changes in the strict school hierarchy.

Ed Zang
as Confessor
View All

Critic Reviews for Heaven Help Us

The picture is timid, and all but worthless, but moviegoers who have always longed to see Donald Sutherland as a monk -- and I know that you guys are out there -- will be in ecstasy.

The strange thing about the movie is the way the moments of inspiration raise our hopes, and then disappoint them.

Audience Reviews for Heaven Help Us

An all-time favorite that I don't mind watching excessively. It leaves me laughing hard each and everytime. FAVORITE SCENE: Kevin Dillon's character along with four others making out in a car on a tow bridge. As things heats up, the bridge starts to open and leaving the four to escape and watch the car fall apart.