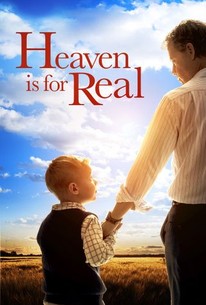 Critics Consensus: Heaven Is for Real boasts a well-written screenplay and a talented cast, but overextends itself with heavy-handed sequences depicting concepts it could have trusted the audience to take on faith.

Critics Consensus: Heaven Is for Real boasts a well-written screenplay and a talented cast, but overextends itself with heavy-handed sequences depicting concepts it could have trusted the audience to take on faith.

Critic Consensus: Heaven Is for Real boasts a well-written screenplay and a talented cast, but overextends itself with heavy-handed sequences depicting concepts it could have trusted the audience to take on faith.

Heaven Is for Real Photos

Based on the #1 New York Times best-selling book of the same name, HEAVEN IS FOR REAL brings to the screen the true story of a small-town father who must find the courage and conviction to share his son's extraordinary, life-changing experience with the world. The film stars Academy Award (R) nominee and Emmy (R) award winning actor Greg Kinnear as Todd Burpo and co-stars Kelly Reilly as Sonja Burpo, the real-life couple whose son Colton (newcomer Connor Corum) claims to have visited Heaven during a near death experience. Colton recounts the details of his amazing journey with childlike innocence and speaks matter-of-factly about things that happened before his birth ... things he couldn't possibly know. Todd and his family are then challenged to examine the meaning from this remarkable event. (c) Sony

John B. Lowe
as Todd's Doctor

Blake Taylor
as Loner
View All

News & Interviews for Heaven Is for Real

View All Heaven Is for Real News

Critic Reviews for Heaven Is for Real

This latest spot of cinevangelism at least sports a theatrical heft ...

Unlikely to convert any skeptics, but if they wander into the multiplex, they'll find that that the prettily photographed sermon goes down easily.

It's not great filmmaking, or even good filmmaking for that matter, but you may find yourself saying "Amen" nevertheless.

This is a big-tent Christian film that wriggles around a lot seeking to accommodate multiple varieties of religious experience, and ends up terminally infected with the virus of postmodern relativism.

A well-acted, family-friendly and timely movie for Easter audiences that is just as much about appreciating life on Earth as it is about what comes after.

There's no antagonist, no resolution, and no real climax - just a series of mildly charming scenes in which Colton shares heavenly knowledge while his family reacts with awestruck tears.

2014 is proving to be the year that faith-based cinema is breaking out of its credible indie vibe and sweeping into wide release mode.

The script stumbles a few times and is a bit too wordy, but the strong acting makes up for it. This is a feel-good family film that just may cause you to shed a tear or two...

Despite its many good points, Heaven is for Real can't escape its limitations, and does at times feel like a TV movie of the week. It is an intriguing story, yet it fails to analyze the issues at hand in any depth.

Presents some compelling theological arguments with a first-rate cast and, for the most part, good direction.

[Heaven is for Real] is simply a good, old-fashioned film the entire family can enjoy and maybe, just maybe, it could spark some insightful conversation.

There are plenty of movies out there that will try to get an audience to question its faith; this one will allow the faithful to examine their beliefs from a position of confidence.

Audience Reviews for Heaven Is for Real

"Heaven is for Real" is based on a book about a boy who tells his Dad about his experience in heaven while he is being operated on. The movie asks a very interesting question. If you knew heaven was real, like had proof, would it scare you? I think that's fascinating, and unfortunately, a lot more fascinating than the movie. This movie was very flat for me, and borderline boring. I don't mind faith based movies at all, but a movie is meant for entertainment. This just seemed to go nowhere, and probably much better suited as a book than a film. The acting was decent at best. I hate to criticize a child actor, but the boy in this movie is not very good at all. He comes off as really awkward and uncomfortable with zero charisma. Again, I feel bad for saying that, but it's true. Had a different child actor been in that role, this may have been much better. Disappointing for me, however, quite a few Christians that I know, Loved this movie. Good for them, and I'm glad this works for it's target audience. So, if you're into these types of movies, check it out. Otherwise, I'd say just read the book.

What's wrong with preaching to the choir? A pastor and his family try to accept that their youngest member might've had a spiritual experience. The foundation for this film is the depiction of middle American lifestyles and Kinnear's performance as a preacher in difficult straits. There are no surprises here and everything plays out pretty much as you'd expect and therein is the flaw of the piece ... they needed to present a surprising twist somewhere here to overcome their own obviousness. Still worthwhile, particularly for choir members.

Heaven is for Real is based on the non-fiction book of the same name by Todd Burpo and best selling conservative writer Lynn Vincent. It was a true story so maybe the negative reaction that Connor's chronicle received from the congregation at the time was what actually happened, Yet it was a #1 New York Times hit so it obviously touched a lot of hearts outside the religious world. The boy's experiences should prompt more probing questions. He saw Jesus for goodness sakes! At least he believes he did, why aren't people in the Church more excited? Regardless of your personal beliefs in the afterlife, it seems like this bestseller should have inspired a more uplifting tale. This could have been the seed for a galvanizing discussion that Christians, non-Christians, atheists and agnostics could have regarding the concept of heaven. The 1977 picture Oh, God! dealt with this subject in a much more innovative way. In contrast here we are nearly 4 decades later and we're presented a fascinating story that is handled in the most utterly routine fashion. It doesn't probe enough to inspire the faithful, the skeptics or anyone in between. fastfilmreviews.com

Heaven Is for Real Quotes