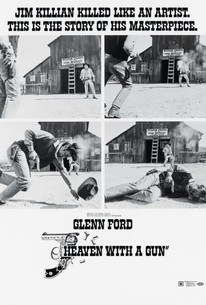 Heaven with a Gun Photos

Jim Killian (Glenn Ford) is a reformed gunslinger who takes a job as a local preacher in Vinagaroon, Arizona. He arrives during a time of conflict between shepherds and cattlemen who are engaged in a bloody range war. When Coke Beck (David Carradine) hangs a local Indian, the victim's daughter Leloopa (Barbara Hershey) enlists the help of Killian. He tries to mediate the conflict in a meeting between the rival factions, but a member of the congregation exposes him as an ex-convict. He also enlists the help of the heart-of-gold saloon-operator Madge (Carolyn Jones). Killian and the townsfolk, women included, organize a march to the watering hole -- the center of the controversy. The cattlemen approach and draw their guns in what could be a potentially violent confrontation.

Barbara Dombre
as Townspeople
View All

Critic Reviews for Heaven with a Gun

Audience Reviews for Heaven with a Gun

There are no featured audience reviews yet. Click the link below to see what others say about Heaven with a Gun!

Heaven with a Gun Quotes