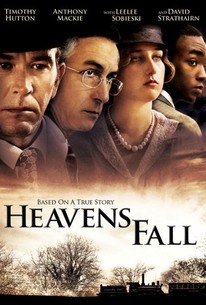 The tragic court case that forever altered the course of American jurisprudence is dramatized for the screen in this courtroom docudrama starring Timothy Hutton, David Straithairn, Leelee Sobieski, Anthomy Mack and Bill Sage. The year is 1931, and nine black hobos have been accused of raping two white women on an Alabama freight train. The accused, who all range in age from twelve to twenty-three, are quickly sentenced to death in the electric chair by an all-white jury fueled by racism and vengeance. But as news of the convictions spreads, something remarkable happens: the plight of the so-called Scottsboro Boys inadvertently ends up fueling the fires of socialism across the globe and the case is quickly appealed to the United States Supreme Court. As each of the nine defendants prepare for their retrials in a Decatur, Alabama courtroom, self-assured New York defense attorney Samuel Liebowitz (Hutton) accepts the formidable task of representing the accused in the trial that will hold an entire nation spellbound.

Heavens Fall tells its story with some interesting stylistic flourishes (a brisk montage of lawyers' closing arguments, for example) and without emotional manipulation.

There's little to applaud and only a base "what a shame" kind of anger. All in all, Heavens Fall is an introduction to history; a prologue whose past should be better explored.

Good movie based on the true story of the Scottsboro nine trials. How racism affected the trial in the deep south, especially since all the jurors were white, southern men. Good solid performances from all the actors, however I wasn't really fond of Hutton's protrayal. He came off a little strange to me, but that may be how is character was supposed to be. His NY accent seemed to come and go at times. Overall interesting, well done movie.