Hector And The Search For Happiness (2014) 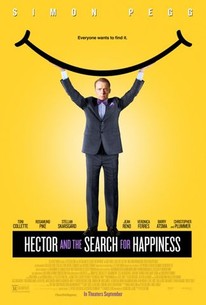 Critics Consensus: Simon Pegg remains as charming as ever, but Hector and the Search for Happiness drowns his appeal in schmaltz.

Critics Consensus: Simon Pegg remains as charming as ever, but Hector and the Search for Happiness drowns his appeal in schmaltz.

Critic Consensus: Simon Pegg remains as charming as ever, but Hector and the Search for Happiness drowns his appeal in schmaltz.

Hector And The Search For Happiness Photos

Hector (Simon Pegg) is a quirky psychiatrist who has become increasingly tired of his humdrum life. As he tells his girlfriend, Clara (Rosamund Pike), he feels like a fraud: he hasn't really tasted life, and yet he's offering advice to patients who are just not getting any happier. So Hector decides to break out of his deluded and routine driven life. Armed with buckets of courage and child-like curiosity, he embarks on a global quest in hopes of uncovering the elusive secret formula for true happiness. And so begins a larger than life adventure with riotously funny results. Based on the world-wide best-selling novel of the same name, Hector and the Search for Happiness is a rich, exhilarating, and hilarious tale from director Peter Chelsom, starring Simon Pegg, Toni Collette, Rosamund Pike, Stellan Skarsgard, Jean Reno and Christopher Plummer. (c) Relativity Media

News & Interviews for Hector And The Search For Happiness

View All Hector And The Search For Happiness News

Critic Reviews for Hector And The Search For Happiness

Hector may indeed learn that narcissism stands in the way of happiness, but he also walks away with his privileges intact and unchallenged.

Staggering out of Hector and The Search For Happiness, I had the impression of having witnessed an unequivocal fiasco, a film no human being would be likely to enjoy.

Think of EAT, PRAY, LOVE which has a similar sort of journey and this is so much better than that.

A movie bearing as faux-naive a title as this has to make a pretty good case for itself. This it decidedly does not do.

This tone-deaf story about a shrink healing himself should come with a bottle of tranquilizers for every patron.

Potential peeps out occasionally in Hector and the Search for Happiness, but then flounders and gets lost in a bland sea of sentimentality and cultural myopia.

Want to be happy? Don't waste your time or money on this movie.

Feels like Michel Gondry Lite, but when it and Pegg let the whimsy go, it can be an affecting story.

Doesn't seem to be in possession of any form of moral compass, and all traces of humanity have been sucked dry by a need to be whimsy for whimsy's sake.

In the end happiness, it seems, is above all in the journey... [Full review in Spanish]

Those who like "life-affirming" sayings will find plenty to like, and while it doesn't quite come together as a whole there are more than enough lovely moments to reflect on.

Hector and The Search for Happiness wors because it's basically a "self-help" movie. [full review in Spanish]

Audience Reviews for Hector And The Search For Happiness

A sweet movie that is predictable.

So flippin' awesome! A stuck-in-a-rut psychiatrist is losing patience with his patients and finds that the problem is himself, so he embarks on a world tour to find the secret to happiness...with some selfish self-actualization along the way. The happy moments are indeed uplifting as hell, but Hector's unexpected imprisonment in a third world prison is truly harrowing and suspenseful. The little details are just marvelous: the Tintin parallels, Hector half-closing his eyes to match his botched passport photo, the papier-mache plane turbulence, Hector's perpetual lack of writing utensils figuring into his emancipation, and Clara's neuroticisms, "Is this conversation going as badly/well as I think it is?" Simon Pegg is absolutely darling as the mild-mannered though emotionally courageous Hector, and Rosamund Pike plays his put-upon yet supportive girlfriend with her trademark icy gutsiness. Ming Zhao (and her waterfall of hair) is riveting as Ying Li, Hector's one-night-one-day-stand, and it's a pity that there doesn't seem to be more substantive projects in development on her IMDb page.

A psychiatrist in a rut travels to find the key to happiness. Is it possible for a film to be trite, cliche, predictable, and effective? This film is all of those things. The resolution to the conflict is obvious from the beginning, and the individual act climaxes are obvious. And while the film doesn't offer any new wisdom about life, love, and happiness, that doesn't mean that its repetition of classic wisdom isn't heart-warming and effective. There are also factual errors in the film, which will bother the more logical and cerebral viewer. Special kudos go to Simon Pegg and Rosamund Pike who give wonderful performances. Overall, it's a lovely though unremarkable film.

Simon Pegg is one of the few people I can pretty much watch anything with and he'd improve it just by being in the film. And I think that that's the case with this movie as well. But even one of the most talented comedic actors around cannot work miracles. I'm sure the film had its intentions in the right place, it wants to tell a sweet and beautiful story about a man learning what makes people happy in order to become a better psychiatrist. This is, of course, a red herring, if you will, as Hector is looking for a way to find out if he can truly be happy with his life. This certainly reminds me of the Secret Life of Walter Mitty, Eat, Pray, Love and other films of that type. In many cases, this movie, feels like it's just an excuse to have a paid vacation. Going to places like China, Africa, and Los Angeles to "film" a movie, but really, you're just enjoying the sights. At the very least this isn't as transparent as Adam Sandler's last film with Drew Barrymore, Blended, where Sandler basically he admitted that this was just a paid vacation. I don't think this movie is as transparent because, at the very least, this film tries to have a semblance of a story. The film is well-cast, as Simon Pegg is incredibly likable so you buy into this idea that he would friends everywhere he went, regardless of the situation he finds himself in, he would find a way to connect to someone. Perhaps it's overstating the point, as I doubt that Simon Pegg can go into any room and instantly makes friends with random people, but he's affable enough to where this slight exaggeration is somewhat believable. The rest of the cast is a revolving door really, no one character sticks around long enough to really make an impression one way or the other. Well, other than Hector's girlfriend Clara, the always excellent Rosamund Pike. And even then she's only around for parts of the film, when Hector skypes her during his journey. I think the story between Hector and Clara, which is really the core of the film, is a little annoying because Hector, for some reason or another, expects Clara to just wait for him while he goes on this journey of rediscovery and self-acceptance, which he has every right to go on, of course. But it's almost as if Hector expects Clara to put her life on hold until he decides to come back, and even he doesn't know when he's gonna come back home. He's also using this journey to visit his ex-girlfriend, the first person he ever truly loved, to see if there was still a spark there. It all makes Hector look incredibly selfish. It was clearly done so you'd think this about Hector, but it's not particularly satisfying. I think it's a stronger story if Clara and Hector break-up, or something, Clara dates someone and at the end, as cliche as it may be, Clara decides that she truly loves Hector and vice versa. It's probably one of the most cliched things in the book, but as far as telling a story, it's probably better than what they did do. Honestly I found the movie to be a bit of a mess, there's no structure, no real reasoning for anything that's happening. Hector meets people, things happen with these people, Hector moves on to the next place, rinse and repeat. It's honestly a series of poorly-thought out sketches. While the basis of the film itself is simple, the journey to true happiness is anything but. Which route do you think the film took? The easy, crowd-pleasing route or the more complex, maybe a little less satisfying route? I'm sure you can guess. And I don't blame them for that at all, I mean it's the story they wanted to tell, it's just that they didn't do it to the best of their abilities. It's also a movie that never really seems to find its footing. Is it a comedy with dramatic touches? Or is it a drama with some slight comedic touches? I'm leaning towards the latter, but there's no synergy between the two. It's two different films, instead of taking two different tones and styles and blending it cleverly to serve one master. It's not exactly a funny movie, but it is an overly sentimental one. That was to be expected, but it is a little annoying. Simon Pegg tries his very hardest, but he cannot overcome the film's flaws on his lonesome. The movie is watchable enough, but I wouldn't call it good. It just missed the mark on a lot of levels, so I can't quite recommend it.

Hector And The Search For Happiness Quotes