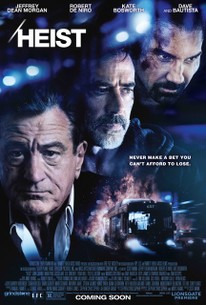 When their attempt to rob a casino owned by the feared gangster Pope (Robert De Niro) goes awry and a shootout ensues, Vaughn (Jeffrey Dean Morgan) and Cox (Dave Bautista) are forced to flee on foot and hijack city Bus 657 and take the passengers hostage. Now, in a high speed chase, Vaughn will not only have to outwit the police, led by Officer Bajos (Gina Carano) who are in hot pursuit, but he will have to contend with Pope's maniacal right hand man, Dog (Morris Chestnut), in order to make it through the day alive. But we quickly learn that things are not what they seem, and Vaughn has more than one card up his sleeve.

On DVD This Week: Bone Tomahawk, Ray Donovan Season Three, and More
The 33 Is Too Predictable
Holiday Movie Calendar 2015

The heist in Heist is pretty pedestrian, and the film turns into Die Hard-on-a-bus with a couple of so-so twists and serviceable spasms of action. If that's what you're looking for, rent Speed instead.

Everything is dully routine, with characters much too composed in volatile situations to be believed.

As throwbacks go, it's more bearable than shoulder pads.

Whatever its flaws, "Heist" is to be commended for repeatedly finding ways to distract us from them.

Caught between genre potboiler and would-be human drama, "Heist" doesn't have a mark to hit. But it leaves some good impressions.

Working in this film's favor is the aforementioned brisk pace and the taut editing. It somehow adds to the sense of desperation and urgency that the lead pair feels. Overall, a passable action potboiler.

It's yet another disappointing turn from the Oscar-winning actor, Robert De Niro - it's becoming difficult to believe that this is the same actor who played Jake La Motta in Raging Bull or Vito Corleone in The Godfather.

... more tedious than exciting as it leads to a preposterous climax.

Despite a high-concept idea and a good cast, this crime thriller feels somewhat half-baked and rushed. It might once have been promising, but it seems like something went wrong along the way.

Echoes of better movies abound in Stephen Cyrus Sepher and Max Adams' screenplay, mixed with an illogic entirely their own.

Unexpected, fast and well acted are the three terms which I'd use to describe this adaptation from director Scott Mann. [Full review in Spanish]

If you paid money to see "Heist", there's little doubt you do feel ripped off. This is one of the least intelligent crime films of the year -- dependent entirely upon chance and the inability to see anything other than what's squarely in front of the characters' faces. Although there was some mildly entertaining acting at times, "Heist" is dumb and just doesn't play. Skip it.

Entertaining and full of suspense, Heist is an adrenaline packed thriller. After losing his job a father who's desperate for money to pay for his daughter's medical treatments joins a crew that knocks over a dirty casino, but when the job goes bad they end up hijacking a bus and are pursued by gangsters and police. Starring Jeffery Dean Morgan, Robert De Niro, Gina Carano, and Dave Bautista, the cast is fairly solid. And the director does a great job at making the bus standoff intense and exciting. The writing however, is rather weak; as it relies on a lot of tropes and has trouble bringing together the various plot threads. A little formulaic, Heist may want for originality, but it still delivers plenty of thrills.

Formulaic and cliched and it tries so much to be up there with the big guns but, ultimately, fails. Robert De Niro cannot save this, sadly. It showed promise but failed to ultimately deliver.