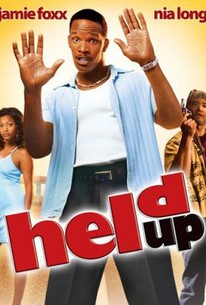 In this fish-out-of-water comedy, Jamie Foxx plays a man named Michael Dawson, though he's confused for both Puff Daddy and Mike Tyson by the citizenry of the podunk southwest town that serves as the setting for Held Up. Road-tripping Michael and Rae (Nia Long) stop in for gas in Michael's new vintage roadster, but she grabs a ride to the airport with a truck full of cowboys after learning he blew more than 10,000 dollars earmarked for buying a home on the automobile. Moments later, Michael loses the car as well when a youth cons him out of the keys. Just when his day couldn't get any worse, Michael lands in the middle of a botched hold-up by amateurs trying to knock over the convenience store. All variety of local law enforcement, from the sheriff (Barry Corbin) to truckloads of unofficial shotgun-toting "deputies," quickly descends on the scene. Michael tries to sweet-talk the frightened gunman (Eduardo Yanez), befriend his fellow hostages (Sarah Paulson and John Cullum), and plan how to reach the airport before Rae's flight leaves, all while not getting shot by the hair triggers inside and outside the store. The film was produced and originally publicized under the title "Inconvenienced."

Ron Sauve
as No Teeth

Critic Reviews for Held Up

There's enough nice timing and character surprises to make it click at least half of the time.

Everybody's timing seems off the beat, as if they're trying to get a handle on the script, which has more tone than jokes.

This slow and talky sitcom may leave its paying customers feeling Held Up.

Held Up is a fish-out-of-water comedy that is all wet from the start.

It's a movie so foul even the folks at the NAACP Image Awards would have to look the other way.

By the end, even the irrepressible Mr. Foxx seems tired and defeated.

Scenes begin with an amusing premise and a few laughs, but quickly fizzle as the jokes become increasingly one-note.

Eastin's plot never strays from the predictable nor creates the proper comedic tension and urgency needed for the story to work.

Held Up is a real dud, with few laughs, no characterization, little story, a cluster of stereotypes and clichés and just plain nothing for Foxx to do.

In this disjointed comedy, Foxx is just a Murphy clone.

There's an obligatory feel-good ending that's totally unbelievable, and the raunchy first act banter between Foxx and his girlfriend is disconcertingly at odds with the Preston Sturges-style stuff that follows.

It's hard not to wonder if Foxx owed somebody a favor when he signed on to make a movie this amateurish.

Audience Reviews for Held Up