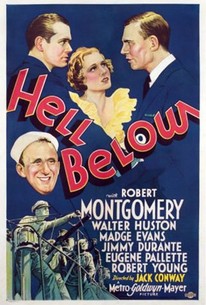 Hell Below transcends its hackneyed World War I plot to emerge as a drama of rare originality and gutsiness. Walter Huston stars as a submarine commander whose lieutenant (Robert Montgomery) falls in love with Huston's daughter (Madge Evans). All cliches (including the intrusive comedy relief of Jimmy Durante) are forgiven and forgotten once the sub is launched on a dangerous mission in the Adriatic. Commander Huston is forced to make several cold-blooded decisions to preserve the safety of his crew members. In one scene, seaman Sterling Holloway is trapped in a room full of poison gas. Huston orders the men not to rescue Holloway, lest they too be exposed to the deadly fumes. As the men grimly try to go about their routine tasks, the dying Holloway presses his face against the glassed-in porthole and piteously begs for help! This brief moment in Hell Below sticks in the mind far longer than Robert Montgomery's own death scene, in which he redeems his reckless behavior during a crucial battle. ~ Hal Erickson, Rovi

Paul Porcasi
as Italian
View All

Critic Reviews for Hell Below

There are no critic reviews yet for Hell Below. Keep checking Rotten Tomatoes for updates!

There are no featured reviews for Hell Below at this time.