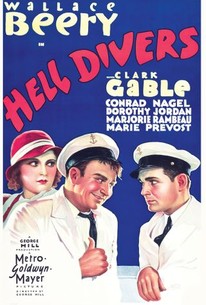 Clark Gable was officially elevated to stardom with this airborne MGM action-adventure, but good old Wallace Beery (whom Gable disliked in real life) ended up with more screen time. They played Naval officers training in the newfangled art of dive bombing while spending a great deal of time squabbling over who is more macho. The two rivals, of course, end up crashing on a deserted atoll only to discover that behind the tough veneer they share a common goal. In the end, the gruff but lovable Beery sacrifices himself so that Gable and the stolid Conrad Nagel may live. As usual in this kind of testosterone-driven action fare, the girls are given short shrift and have to literally shout to be heard above the din. Dorothy Jordan is forgettable as Gable's love interest, but both Marjorie Rambeau and Marie Prevost, as a couple of goodhearted floozies, make the most of their all too brief moments. Hell Divers is the kind of film where action in the skies makes up for the lack of any real drama and where characters are constantly uttering such lines as "Gee honey, I'm just goofy about you!" The film was produced with full co-operation from the U.S. Navy on-location at San Pedro and in Panama. ~ Hans J. Wollstein, Rovi

Virginia Bruce
as Girl
View All

In "Hell Divers" there is a supreme "titan" that the public does not see: the cameraman. [Full Review in Spanish]

There are no featured reviews for Hell Divers at this time.