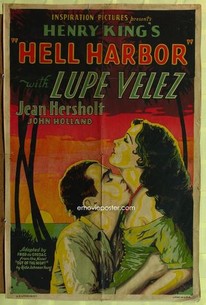 Even allowing for the comparative freedom of the pre-Production Code years, 1930's Hell Harbor was pretty strong meat for its time. The story is set on a remote Caribbean island, entirely populated by descendants of Sir Henry Morgan's pirate crew. Morgan's brutish great-great-grandson Henry Morgan (Gibson Gowland) intends to shower himself with gold and to that end forces his daughter Anita (Lupe Velez) into a marriage with despicable moneylender Joseph Horngold (Jean Hersholt). Coming to Anita's rescue is shipwrecked American sailor Bob Wade (John Holland), whose presence sparks an unchecked riot on the island. The film's most chilling scene finds Morgan. Director Henry King also produced the film through his own Inspiration Pictures Corporation.

Human trafficking, larceny, murder and attempted murder, lust, and romance, this movie has it all.

There are no featured audience reviews yet. Click the link below to see what others say about Hell Harbor!