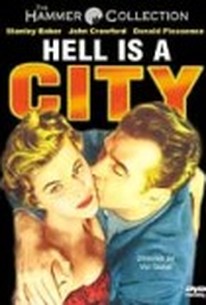 With an award-winning screenplay by director Val Guest, this is a first-rate cops-and-robbers crime drama about a dangerous escaped convict and the police inspector who goes after him. The gritty industrial city of Manchester and its outlying moors provide a somber backdrop to the action. Inspector Martineau (Stanley Baker) suspects that the escaped thief, Don Starling (John Crawford) is going to return to Manchester to retrieve a cache of jewels he hid away before being convicted. The sudden, brutal murder of a woman and the missing money she was carrying, tips the Inspector off that his suspicions were right. He starts tracking down the killer and the gang of men he knows must be working with him, as suspense builds at every turn. The gang falls one by one, until only the killer is left. ~ Eleanor Mannikka, Rovi

George A. Cooper
as Doug Savage

Russell Napier
as Superintendent
View All

Critic Reviews for Hell Is a City

Little detection is needed with a gang so improbably stupid as not to notice dye on their fingers, and the toughness caricatures itself in the final bedroom scene, a classic of unintended comedy.

harkens back to the pulp serials where noir was birthed

It's a gritty Hammer story.

Audience Reviews for Hell Is a City

Hell Is a City Quotes