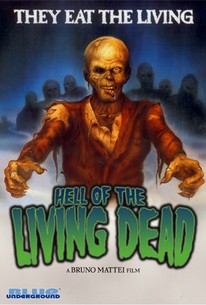 In this woeful "zombie" film, an accident occurs in a scientific lab in Papua-New Guinea sending out a dangerous chemical in a cloud of green smoke and turning the technicians and locals into ghouls ravenous for human flesh. An Italian news reporter (Margit Evelyn Newton) and her crew land on the island in search of the story, quickly followed by a search-and-destroy mission of soldiers. From that point onward, highly unreal dialogue ("something eating you?") would classify the movie as a cult-camp favorite. When the mismatched or unmatched sequences in the film are combined with ugly color and moronic dialogue, it is difficult to tell whether the living-dead or brain-dead dominate the film. ~ Eleanor Mannikka, Rovi

More than any of its myriad names, the truest is one that has never, as far as I know, been given to it in any release in any country: That F---awful Bruno Mattei Zombie Flick.

Featuring bland zombies, an awesomely pointless and silly nude scene, boring story that doesn't go anywhere, lush locations and beautiful cinematography, awkward acting and an all over the place message, Hell Of The Living Dead is another sleazy italian zombie flick that's entertaining enough for it's bad bits, which run aplenty. Add some outrageous deaths at the end and this is a "success".

This is one bad film, so bad it makes you stay the distance just to see how ludicrous it gets! But like with so many of these cheesy Italian Zombie-fests they are fun and amusing and GORY - and this one is no different. An eventful ride right up until the eye-popping finale.

Hell of the Living Dead is a gory Zombie flick that's actually very good. The gore is brutal and the action is great, the music from Dawn of the Dead was nice since that's one of my other favourite Zombie flicks, the S.W.A.T uniform was identical to the S.W.A.T uniform in Dawn of the Dead. The stock footage is interesting since some of them doesn't have any plot like a monkey jumping to a tree or a group of fruit bats flying about but Bruno Mattei explained on the interview that the stock footage was used to make it seem more like the New Guinea jungle, the footage of the tribe had a plot to the film since they was in the village with them. The Zombie make up was good and looked effective, the whole singing in the rain bit was a laugh especially when the Zombies get him. Hell of the Living Dead (Zombie Creeping Flesh, Virus, Night of the Zombie) is a great low budget gory Zombie film that does not disappoint on the violence, check this one out.

terrible in the fun but shit sence.