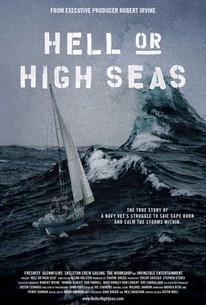 This feature-length documentary written by and starring U.S Navy veteran Stephen O'Shea follows his death defying journey to raise awareness for PTSD and veteran suicide as he sails across the dangerous waters of Cape Horn. A cause close to his heart, O'Shea suffers with PTSD and is the survivor of a failed suicide attempt. The film acts as a message to fellow veterans that there is hope in life after service and blending back into civilian life is possible with the right support. Directed by Glenn Holsten.

Achingly beautiful and done with great respect and love for the power of the sea.

Alternately fighting heat and cold, there are just as many moments of just savoring the experience and it is an exhilarating trip for audiences to stag along on.

It is a beautifully constructed documentary that, much like its courageous subjects, is told with open-hearted bravery and an adventurous spirit.

Grieger's a compelling character, and director Glenn Holsten does a good job of stitching together the caught-on-the-fly cinematography.

A mesmerizing story of human drive and will that will blow away your mind with its incredible visuals.

There are no featured reviews for Hell or High Seas at this time.