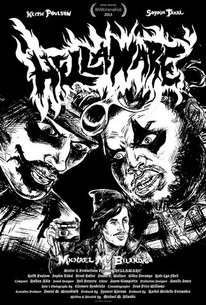 HELLAWARE gently satirizes the world of highbrow art through the eyes of a wannabe photographer who becomes consumed by the bright lights of mainstream success. Jaded by the "incestuous, New York, socialite shit" that sells at prominent art galleries, Nate (Keith Poulson) embarks on a quest for a more authentic brand of contemporary art. When a coked-up YouTube search leads to a music video from Delawarean Goth rappers Young Torture Killers, an Insane Clown Posse knock-off, Nate knows he's found his subjects. He soon drags his friend-with-benefits Bernadette (Sophia Takal) to rural Delaware to shoot the group playing in their parents' basement. To "immerse himself" in the group's culture and add an extra layer of realism to his work, Nate befriends the rappers and makes return trips to get to know them. But as his relationship with group develops, he becomes increasingly aware that, while you can take the boy out of the art world, you can't take the art world out of the boy. A coming-of-age New York comedy in the class of modern indie darlings like TINY FURNITURE or FRANCES HA, HELLAWARE is written and directed by Michael Bilandic and made its world debut at BAM Cinemafest. (C) Factory25

Louis A. Miller
as Gallery Patron

Hunter Zimmy
as Theodore
View All

Bilandic does perfectly capture the laid-back style of the twentysomethings (the lead actors all do fine work) and manages to present a fresh story of callow youth caught up in their own American odyssey.

A micro-budget indie best described as the cinematic equivalent of a modestly amusing shaggy-dog story that meanders toward a clever punchline.

The old story of art as a refuge for scoundrels and callow youth is amusing and updated with assorted details.

A very funny slice of art world satire, "Hellaware" will ring true for anyone who's encountered this kind of behavior before, and really, haven't we all?

The film stays engaging as a quick-sketch study in artist-subject ethics, and how pretentious blather might easily become a form of doublespeak, a sort of theoretical smoke screen for blatantly me-first conduct.

An entertaining satire of the ultra-pretentious art scene in New York.

As Nate learns, it's one thing to create something attention grabbing, but quite another to say something. "Hellaware" does both.

Despite covering some well-worn territory, Hellaware feels fresh and manages to offer the same old criticism without the same old self-seriousness.

Sarah Winshall
Under the Radar

New York art-world hipsters get raked over the countryside campfire coals in Hellaware, a frequently hilarious - if ultimately somewhat predictable - satire about artistic exploration and pretension.

A broad and occasionally disjointed indictment of the New York art scene and horrorcore rap that leaves no broad side of a barn untargeted.

There are no featured reviews for Hellaware at this time.