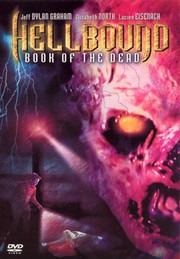 Hellbound: Book of the Dead

Hellbound: Book of the Dead Reviews

Steve M
July 6, 2007
Diane (North) murders a man and tries to reanimate the corpse with black magic. When the spell appears to fail, her husband (Graham) chops up the corpse and throws it in the sea. But as he is getting ready to dispose of the parts, the dismembered corpse animates. And things only get worse after that....

"Hellbound" is film that features some nice camera work and some fairly decent make-up effects. The acting is also better than most modern direct-to-DVD horror flicks; in fact, Elizabeth North and Jeff Dylan Graham actually show some real on-screen chemistry and viewers may become invested in their relationship and come to care about them... if they lasts through the first muddled, boring first half-hour of the film.

Even though "Hellbound" leads with nudity and mysterious murders up front, the scene is so protracted that it inspires boredom rather than whetting the appetite for more sex and violence. It also doesn't help that the segments that follow likewise drag and seem totally unconnected with the opening scenes. Even the most patient viewers will start to lose that patience and wonder if this movie is going anywhere by the time everything starts to come together.

This is one of those films where patience (or the ability to multi-task while watching movie) is a virtue, because when this film's story finally gains real focus, at about thirty minutes in, it actually turns into a rather atmospheric and almost classical horror flick, with some very stylish lighting and photography at times. The director shows himself to have a good eye for framing a scene.

However, as good as the final two-thirds of this film are, the weak start drags it down severely. Another weak spot is that I think it features the worst fake blood I've seen in any picture. Usually it's too thin and too brightly red, but here it's so dark to almost be black; it might even be black. (I wonder if someone was reading about the blood effects in "Night of the Living Dead" but attempts to redden-up the chocolate syrup failed and they had to keep going due to budget and time constraints.

Despite it's flaws, I think this movie is worth checking for those with an interest in low-budget horror films. One just has to get through that first excruciating half hour. (With some heavy re-editing and trimming, this film could easily have been a Six-tomato effort. It would have been about 60 minutes long, but it would have been far better for it.)

Matthew S
December 29, 2005
anybody who'd just like to get a kick out of watching a really, really, really bad, boring, shockingly ridicolous movie, check this one out
Page 1 of 1