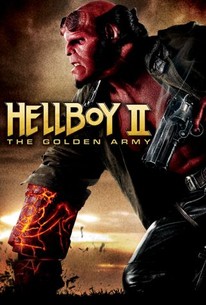 Critics Consensus: Guillermo del Toro crafts a stellar comic book sequel, boasting visuals that are as imaginative as the characters are endearing.

Critics Consensus: Guillermo del Toro crafts a stellar comic book sequel, boasting visuals that are as imaginative as the characters are endearing.

Critic Consensus: Guillermo del Toro crafts a stellar comic book sequel, boasting visuals that are as imaginative as the characters are endearing.

Ron Perlman returns to the role of the big red BPRD agent in this sequel to 2004's Hellboy, directed once again by Guillermo del Toro and scripted as before in collaboration with original Hellboy creator Mike Mignola. For centuries, an ancient truce has kept the naïve citizens of the human race safe from the horrors of the invisible realm -- but that's all about to change, and fast. A ruthless leader has emerged in the invisible realm, a tyrant just as comfortable walking the surface realm as he is living in the land of fantasy. When this power-mad ruler defies his bloodline to assemble an unstoppable army of fantastical creatures that he will use to wage a supernatural war on humanity, it begins to appear that humankind's days are numbered. But Hellboy (Perlman) isn't about to stand idly by as the planet is purged by a demonic despot, and with a little help from his team at the Bureau for Paranormal Research and Defense, he may just be able to send our otherworldly overlords packing. Of course, Hellboy's pyrokinetic girlfriend, Liz (Selma Blair), is always willing to conjure up an inferno or two when things get desperate, aquatic Abe (Doug Jones) is prepared to dive headlong into any battle, and protoplasmic mystic Johann (voice of Thomas Kretschmann) proves an invaluable companion in times of inter-dimensional conflict. Now, as the creatures who inhabit the spiritual realm gear up for an all-out attack on the human plane, the only one capable of saving the Earth is a tough-talking hellspawn rejected by both worlds. ~ Jason Buchanan, Rovi

This, like the first Hellboy, is del Toro on holiday in Hollywood, having as much fun as he can without totally compromising his considerable powers of invention.

The film's exuberance, and the sense that it's all one big gimmick-packed action toy, give Hellboy II: The Golden Army a refreshing cinematic purity.

The plot is paper thin (something about an ancient battle between humans and mythical creatures and a goblin-built clockwork) but Guillermo del Toro's talent has always been to create worlds and bring creatures to life.

Hellboy II: The Golden Army has the technical brilliance of a Renaissance masterpiece and a brain the size of a pea.

Full of imaginative creatures and settings, Del Toro lets loose on this fun sequel that improves what came before. Ron Perlman is perfect as the cocky hero with a heart. [Full review in Spanish}

There's still too much posing for the camera, but the introduction of dozens of new fantastical deviations drowns out the typical overdose of heroic photo stances.

The rarest of sequels that is actually better than its predecessor.

So, follow the yellow brick road to Hell, Hellboy that is, as Big Red and company attempt to save the world from destruction by an invisible realm...

The film is full of fascinating creatures and a mythical world unlike any seen on screen since, well, del Toro's last film, Pan's Labyrinth.

... one of those cinematic rarities where the sequel perfectly and appropriately complements the first. [Full review in Spanish]

Guillermo del Toro did it again. His imagery and visual language are unique in fantasy cinema. He easily exceeds expectations for his second Hellboy film and creates one hell of a fun fantasy picture. A movie that has everything an action comic adventure needs: so many funny, pretty and ugly creatures that you could fill 5 films with them; likable heroes and cool villains; humor, even silliness, yet a certain depth and care for the characters you start to love and want to follow around for all of their adventures; great, spectacular action scenes and outstanding special effects. Sure, the plot doesn't always make sense, but all the neat ideas, one-liners and breathless pace more than make up for it. In short: Bloody fantastic.

The infernal superhero and his team reunite to stop an elfin prince from reawakening a dormant robotic army to wage war on mankind. One thing that you can take for granted when it comes to films by Del Toro is that it IS going to look absolutely fantastic, and so it does. The wonderful art design shares the look of some of his earlier gothic fairytales such as Pan's Labyrinth, as well as the combination of fantasy and eco-message that is the trademark of Myazaki (the most visually extraordinary example being the stunning death of the forest elemental.) The troll's market is also worth a mention, which is akin to a Tim Burton reinvention of Mos Eisley, but as I said, we always knew that the imagery was never going to be in question. The story has a combination of fantastic creatures, epic battles and Men In Black style visual gags that comes across as The Return Of The King with a sense of humour. The jokes aren't top drawer, but it's always amusing and the frenetic action sequences are exciting and fun. Perlman is as reliable as always and Luke Goss once more is a charismatic and multi-layered bad guy, the only real weaknesses being the corn infested love interests; in fact I couldn't help thinking that the darker edges of Del Toro's vision were probably tempered in an attempt to appeal to the Harry Potter market. As a whole though, it's a lot of fun and as always seems to be the way with superhero movies is rather better than the first one.

Guillermo del Toro's sequel to his 2004 comic-book-success is humorous, exciting and majestic as it explores a whole different realm of the Dark-Horse-adaptation. Ron Perlman once again gives a smart and distinct performance with laughable dialogue and action all around. 4.5/5