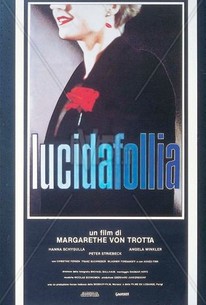 Hanna Schygulla and Angela Winkler are the stars of the German psychological drama Friends and Husbands. Having both been burned by unhappy relationships with men, Schygulla and Winkler become more and more reliant upon each other. The men in their lives can't come to grips with their strong friendship, and begin writing off Schygulla and Winkler as "oddballs." As in most of her films, writer/director Margarethe von Trotta probes the unspoken human complexities that draw people together. Von Trotta also weaves a political subtext into the proceedings: it isn't immediately obvious, but it's there all the same.

Peter Aust
as Hansen
View All

The men are variously cads, heels, frauds and egoists... the women are enlightened spiritual beings who communicate with meaningful glances (and garrulous glancers they are).

How many more accolades can I heap on [Margarethe] von Trotta, the greatest of the great German directors?

Although the characters don't reach the complexity that is expected of Margarethe von Trotta, it doesn't affect the careful mise-en-scène that is characteristic in the filmography of this director. [Full Review in Spanish]

A nuanced drama exploring the values of friendship between women

There are no featured reviews for Heller Wahn at this time.