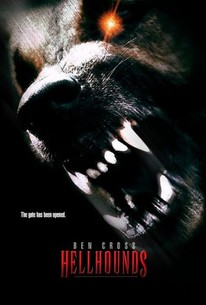 Director Rick Schroder tries his hand at horror with this nightmarish shocker about an ancient Greek warrior attempting to rescue his wife's soul from the underworld while fending off the hounds of hell. His bride Demetria (Amanda Brooks) poisoned on their wedding day by a jealous rival, crestfallen Kleitos (Scott Elrod) rallies the troops and storms the underworld, where Hades has already laid claim to Demetria's soul. The deeper Kleitos and his warriors venture into the underworld, the greater the danger of falling victim to Hades' snarling pack of vicious hellhounds, who are quickly closing in from all sides.

James A. Woods
as Theron

Andrew Howard
as Andronikus
View All

There are no critic reviews yet for Hellhounds. Keep checking Rotten Tomatoes for updates!

There are no featured audience reviews yet. Click the link below to see what others say about Hellhounds!