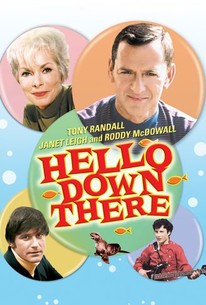 Hello Down There Photos

When irascible boss T.R. Hollister (Jim Backus) threatens to pull the plug on an underwater environmental living project, employee Fred Miller (Tony Randall) and his wife, Vivian (Janet Leigh), take their family down in the deep to live for 30 days. With all the modern conveniences of a home on land, the family even invites a rock & roll band to get down and record. Merv Griffin (himself) arranges an underwater interview for his television show while Mel Cheever (Ken Berry) schemes to get Fred's job back on dry land. Two of the Miller kids, Lorrie (Kay Cole) and Tommy (Gary Tigerman), join three others (Richard Dreyfuss, Roddy McDowall, and Lou Wagner) in the rock band. Friendly dolphins fend of shark attacks as the land sharks try to scuttle the underwater project in this family film. Music is provided by Jeff Barry.

Merv Griffin
as Himself

Lora Kaye
as Secretary
View All

Critic Reviews for Hello Down There

The dolphins get all the lines. A pity they didn't write them.

Hilariously goofy attempt by Hollywood to be "with-it"

Audience Reviews for Hello Down There

This movie has an excellent cast and an interesting story, but it gets way too silly sometimes especially the songs. For the most part it's funny, though. Overall I enjoyed it, and if you like funny and interesting movies check it out.

Stupid, it's a shame to see talented performers trapped in junk like this!

Hello Down There Quotes