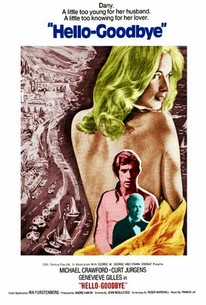 In this British sex-comedy, a car salesman journeys to France and encounters an apparently lonely woman. He immediately begins to successfully woo her only to learn that she is actually a baron's wife. Fortunately, the baron believes in open marriages and winds up hiring the Englishman to teach his son (from an earlier marriage) everything about automobiles. Meanwhile the car salesman finds himself falling seriously in love with the wife. The baron really doesn't mind as he himself is involved with another. ~ Sandra Brennan, Rovi

At every major crisis in the plot the characters shrug their shoulders and say, Why not? Like the basic Idiot Plot itself, this device keeps the movie going for at least two hours. Without it, Hello-Goodbye would end every 10 minutes.

There are no featured reviews for Hello-Goodbye at this time.