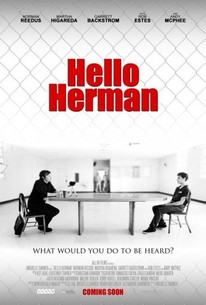 Set in the not so distant future, sixteen year old Herman Howards enters his suburban school and kills thirty nine students, two teachers, and a police officer. Just before his arrest he emails his idol, famous journalist Lax Morales, sending him clips of the shootings captured with Herman's own digital camera. In the clips Herman tells Lax, "I want to tell my story on your show". Hello Herman explores why and how a massacre like this can happen in our society, desensitization in America, youth violence and bulling, the impact of the media and ultimately our need for connection. (c) Official Site

At least it doesn't lack in big moments where people cry and scream.

It barely tries to offer insight into its much-debated subject, content to rip the scab off an ever-fresh wound for the sake of controversy.

The dialogue is all surface: Emotions are laid out on the autopsy table for the audience to dissect and analyze, but rarely feel.

The alignment with Herman's perspective, even as it never downplays the gravity of his crimes, leads the film into a set of obvious conclusions.

It's a call to look at ourselves, our families, our schools, our workplaces, and our communities and doing everything that is within our power to do.

Lacks any kind of elegance or finesse, instead bluntly bludgeoning its audience with the obvious, exuding all the grace of high school theatrical production.

Hello Herman suffers not so much from its boldly stated anti-bullying agenda but from its failure to come to any conclusions.

... a messy, blunt movie that manages to push a lot of buttons. Surely one of them does something.

A timely and important movie...I've enjoyed Norman Reedus' excellent work in TV's THE WALKING DEAD, but I think he's even better here.

There are no featured audience reviews yet. Click the link below to see what others say about Hello Herman!