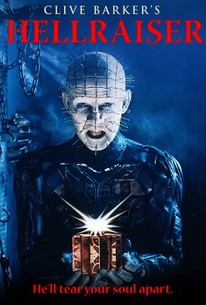 The directorial debut from horror novelist Clive Barker stars Sean Chapman as a man who buys a strange Chinese puzzle box in a sex shop only to discover that its solution opens a portal to Hell.

Oliver Smith
as Frank the Monster

The conclusion is pat and predictable, an amateurish effort at showing the advantages of good over evil.

The reason the movie works as well as it does is because of its human characters.

Horror is at its best when it's relentless. Clive Barker knows this, and his debut feature as director is so gleefully vicious, so relentlessly grim that it's going to be very hard for fans of the genre not to like it.

With Hellraiser, Clive Barker created one of the most genuinely disturbing movies of the last 20 years.

Utterly bizarre and entirely ridiculous - and yet effective, an imaginative guignol festival, like the goriest of soap operas, in which one wrong move opens a portal to hell.

Barker's vision cribs equally from the mythos of vampires and zombies, but Hellraiser's overriding ridiculousness (and nagging budgetary shortcomings) can't disguise the fact that the movie is at least unwittingly a product of the AIDS crisis.

Hellraiser [is] one of the most gruesome, visually horrific fantasy films you will ever see. Written and directed by Clive Barker, the film is a relentless, unflinching foray into a netherworld of monsters, murder and the supernatural.

It's gross! It's unenjoyable! And I can't stop thinking about it!

One of the most original and unequaled horror films of the decade.

More than with terror, the movie plays with revulsion. And that is its (relative) novelty. [Full Review in Spanish]

Arriving in a decade in which most movie monsters were monotonous slashers, the Cenobites were truly exciting, original, and unsettling characters.

A gory, trashy cult classic of the genre with an interesting (and very disturbing) idea, fascinating villains and a great makeup that stands out above all else, yet on the other hand the poor special effects and cheesy moments make it feel like a second-rate horror movie.

People are pretty split on whether they find this film to be the start of the new frontier of horror, and the beginning of the horror porn manifestation we see today, or it's an easily forgotten flick that tries too hard. Whatever people say, Clive Barker is gross in the best kind of way, and this is definitely something never before seen. Fusing together sadomasochism and the limits of physical pleasure with the terrifying machinations of pain was never truly explored before in mainstream horror. In the indie market this was a palatable formula, but here there's also concern for gore, humiliation, and positing the female victim with the male monster. Frank (Chapman) is, by all accounts, a giant pervert, who travels the world, doing inappropriate things and people. He buys a mystical box from a market in Eastern Asia, which is supposed to bring him unbridled pleasure and pain. He figures out the mechanism, and opens it, experiencing the pain of meat hooks, demons, and Pinhead, the enduring figure for the many sequels spawned from this film. Frank's body reforms at his childhood home thanks to the blood of his brother being spilt. The transformation from blood and guts, to muscle and cartilage, was the most gruesome thing I have seen onscreen, and it has the most staying power of any scene throughout the film. There's more blood, more sexual tension, and sabotage sprinkled throughout, but most of the plot concerns Frank and Julia's (Higgins) relationship, as she kills people for the lothario to feast upon. It's a bit cut and dry with its story, but it packs on the gore and bloodlust with aplomb, and it's all you can do not to marvel at the effects, which are almost thirty years old. That and the bonds made between two pivotal humane experiences that are so often thought to be counterintuitive of one another, really make for an interesting and uncomfortable watch.

Another 80s horror classic ruined by many half-assed sequels. "Hellraiser" has an excellent concept and offers plenty of gore. Everything from the atmosphere, script, and characters are great. The story is disturbing and unpredictable. Some of the special-effects are cheesy but that is not surprising considering the time the film was made. If only Clive Barker could have directed some of the sequels.