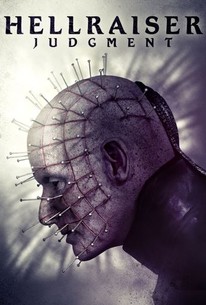 Two detectives are tasked with hunting down a horrifying serial killer who has been threatening their city. They team up with another detective to further investigate this spiraling labyrinth of terror, which seems to involve the supernatural as well.

John Gulager
as The Assessor

Mike J. Regan
as The Chatterer

The dialogue is execrable, which partly excuses the inert performances; the sets - including one that looks like a shop's filament bulb display - are more interesting to look at than the actors.

It is frustrating that there are morsels of some inspiration in here that either get rushed over or buried in quite extreme gruesome imagery and predictable plotting.

This is almost the exact same plot as Part 5! Is anyone paying attention to the Hellraiser machine anymore?

Overall, the lack of resources soak the screen, but it adds to the film's grotesque charm.

The imagery is creepy and the pacing is brisk, but the story is a faded carbon copy of other, better serial killer thrillers, and the new additions to the Hellraiser mythology rob the Cenobites of their deviant allure and otherworldly menace.

Hellraiser: Judgment does not entirely work as a movie. It's a mixed bag, with the stuff I enjoyed ultimately outweighed by the stuff I did not. But it comes so close to breaking even.

The Hellraiser movies have been soulless for so long - and what's the point of a Cenobite without a soul to tear apart? At least Judgement gives them a little something to chew on. It's not a great movie, but it's a better than average Hellraiser sequel.

...a must-rent for Hellraiser fans, and a reasonable maybe-rent for fans of the Saw series and more recent franchises in that vein, as well as anyone who is still awaiting the Spawn reboot.

At the end of the dayHellraiser: Judgment, while not perfect nor as good as the classic Hellraiser films, delivers a rather striking vision that feels as new as it does familiar.