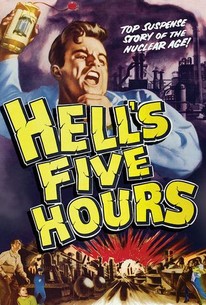 Hell's Five Hours begin ticking away when Nash (Vic Morrow), a disgruntled employee of a rocket-fuel manufacturing plant, goes berserk. Wielding a home-made bomb, Nash threatens to blow himself, his hostages and the plant to smithereens. Nash's supervisor Mike (Stephen McNally) takes it upon himself to talk Nash into surrendering, playing for time while all the fuel is pumped out of the plant's supply tanks and the rockets are removed from the premeses. Mike has only five hours (hence the film's title) to convince Nash to come to his senses. Hell's Five Hours makes up in tension what it lacks in production finesse.

Will J. White
as Al

Ray Ferrell
as Eric
View All

There are no critic reviews yet for Hell's Five Hours. Keep checking Rotten Tomatoes for updates!

There are no featured audience reviews yet. Click the link below to see what others say about Hell's Five Hours!