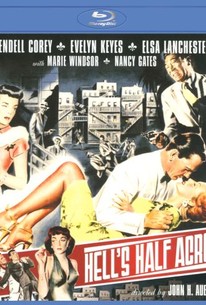 Hell's Half Acre was written directly for the screen by Steve Fisher, whose I Wake Up Screaming remains one of the definitive "film noirs". The scene is a rundown section of Honolulu, where there dwells a group of wannabes, hasbeens and never-weres. While trying to go straight in this environment, ex-racketeer Chet Chester (Wendell Corey) is shaken down by his former criminal cohorts. Chester's girl friend Rose (Nancy Gates) kills one of his tormentors, whereupon Chester takes the blame, assuming that he's still got enough pull to get off with a light sentence. Meanwhile, Dona Williams (Evelyn Keyes) arrives on the scene, certain that Chester is her long-lost husband. When Rose is murdered, Chester escapes from jail, intending to prove Dona's innocence--and to square accounts with the 10-year-old son he never knew he had. Elsa Lanchester provides much-needed laughs as a dotty cabdriver. Dismissed upon its first release, Hell's Half Acre is now considered one of the most durable of Republic's mid-1950s features.

Critic Reviews for Hell's Half Acre

Charles Dickens is responsible for a lot of bad drama.

Audience Reviews for Hell's Half Acre

Where did this come from? Elsa Lanchester, Keye Luke, Philip Ahn, Marie Windsor, Jesse White -- a great cast. And actually filmed in 1950s Honolulu. I love seeing those images from so long ago now. The title's a little misleading, however. Yes, there was such a place in downtown Honolulu -- roughly what is now Chinatown. But very little of the substance of this story actually takes place there or portrays anything nearly as gritty as the real life people and activities that gave the area its infamous name. Kind of a sanitized half acre of hell. But I give them credit for actually going in to Chinatown and shooting the scenes they did. You'll recognize some of that whole Hotel Street milieu if you've ever seen the original Hawaii Five-O shows set in that area of town. Waikiki was already very different, though, by the time Jack Lord started cleaning up the streets. It's good to see it so 1950s underbuilt. What a difference a decade made.