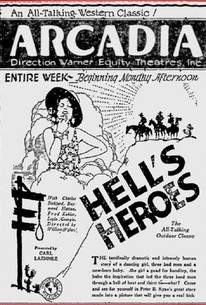 William Wyler was still primarily a western specialist when he was assigned to direct Hell's Heroes. Based on Peter B. Kyne's Three Godfathers (which was filmed officially and unofficially several times), the story deals with three frontier bandits (Charles Bickford, Raymond Hatton, and Fred Kohler Sr.) who come across a pregnant woman in the desert. The woman dies in childbirth, but not before the three fugitives have promised the unfortunate mother to locate the baby's father. Two of the three criminals are killed before they are able to keep their promise, but the surviving bandit (Bickford) restores the baby to its father. Having accomplished the only good deed in his life, the bandit dies from drinking poisoned water. Filmed in the Mojave Desert and the Panamint Valley, Hell's Heroes represented William Wyler's first "outdoors" talking picture; even after attaining the front ranks of his profession, he would return to the western genre with such "A" productions as The Westerner (41) and The Big Country (58).

There are no critic reviews yet for Hell's Heroes. Keep checking Rotten Tomatoes for updates!

There are no featured reviews for Hell's Heroes at this time.