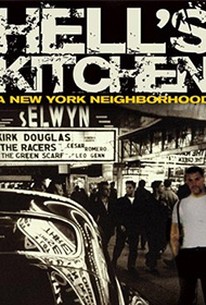 Hell's Kitchen, New York City: In an era when real estate development and gentrification threaten to squeeze low-income residents out of this vibrant, multi-ethnic community, filmmaker Kamal Ahmed turns his camera on the people who walk these streets every day to offer a portrait of the neighborhood that has been immortalized in movies for decades. It's one of the Big Apple's most notorious neighborhoods, and the people who live there are the kind of folks who have to struggle just to get by. In order to pay tribute to Hell's Kitchen, Ahmed speaks with the very people who made it great. These are the laborers, the painters, barbers, tattoo artists, and other working class heroes. After paying tribute to a place many thought would never change, the filmmaker returns to highlight the redevelopment project that made it virtually unrecognizable in 2007. Appearances by such neighborhood fixtures as John Michael Bolger, Charlie Sheen, Lloyd Kaufmann, and Mira Sorvino make this an urban love letter that's sure to strike a chord deep within every nostalgic New Yorker.

There are no critic reviews yet for Hell's Kitchen: A New York Neighborhood. Keep checking Rotten Tomatoes for updates!

There are no featured audience reviews yet. Click the link below to see what others say about Hell's Kitchen: A New York Neighborhood!