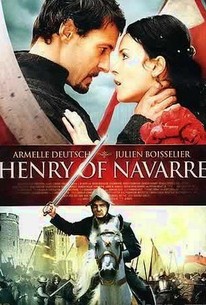 The remarkable life of one of France's most influential leaders is dramatized in this stylish historical drama. In 16th Century France, political power walks hand in hand with religion as the Royal Family are devout Catholics and Huguenots (early Protestants) are treated as second-class citizens. Henry (Julien Boisselier) is a Huguenot military leader who has become a hero in Navarre, a territory in Southwest France, and as Nostradamus (Fritz Marquardt) predicts a remarkable future for him, he is introduced to Catherine de' Medici (Hannelore Hoger), the Catholic queen of France. Catherine clearly holds power over feeble-minded King Charles IX (Ulrich Noethen), and she is keen on holding on to her position by seeing her sons go on to rule the nation. But as the Huguenots become restless and Henry looks to be the potential leader of a revolt, Catherine arranges a marriage between Henry and her daughter Margot (Armelle Deutsch), certain the alliance will stop the budding conflict. But the nuptials only leads to the infamous St. Bartholomew's Day massacre as Catholics attack Huguenots, leading to the death of thirty thousand people. Henry is captured by the Queen's army but escapes to lead the Huguenots in a war against the throne; while Henry is forced to resort to violent means, his goal is to end the fighting by establishing religious freedom and ending faith-based rule in France. Henri 4 (aka Henry of Navarre) was originally produced as a mini-series for European television; it was also edited into a theatrical feature, and this version was an official selection at the 2010 Berlin International Film Festival.

Paulus Manker
as Legat
View All

There are no critic reviews yet for Henri 4 (Henry of Navarre). Keep checking Rotten Tomatoes for updates!

There are no featured reviews for Henri 4 (Henry of Navarre) at this time.