Henri Langlois: The Phantom of the Cinematheque (2004) 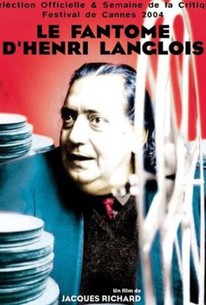 Henri Langlois was, in many respects, the ultimate film fan. In 1936, at the age of 22, Langlois became (along with Jean Mitry and Georges Franju) one of the founders of the Cinémathèque Française, a theater and museum devoted to preserving the history of the motion picture. Initially a tiny operation financed by private funds, the Cinémathèque, with time, grew into Europe's most important film archive, collecting and preserving prints of rare films from all over the world and protecting many rare gems of the French cinema from destruction during the Nazi occupation of World War II. Langlois' enthusiasm for sharing the treasures of his collection with others helped spawn a film-crazy generation who created the French New Wave of the '50s, and in time, the French government acknowledged the importance of the Cinémathèque's work by financing their endeavors. In 1968, the French minister of culture, André Malraux, responded to Langlois' difficult personality and sloppy bookkeeping by pulling the government's financing of his projects, which led to an international outcry leading to the shutdown of the Cannes Film Festival by activists and film buffs. The Cinémathèque's funding and Langlois' leadership were later restored, and in 1973, his work in film preservation was honored with a special Academy Award. Henri Langlois: The Phantom of the Cinémathèque is a documentary which chronicles the life, times, and passions of the legendary archivist and includes interviews with his friends, contemporaries, and colleagues -- including Claude Berri, Claude Chabrol, Jack Valenti, and Daniel Cohn-Bendit.

Critic Reviews for Henri Langlois: The Phantom of the Cinematheque

An inspirational film for cinephiles everywhere.

The tale of this rotund man, with his unquenchable passion and ark-load of supporters is, to a great extent, the history of the cinema itself.

Anyone with a curiosity about how film got to be the art form/obsession it is today will want to learn about the man who helped make it so.

Jacques Richard's affectionate documentary makes a persuasive case for Henri Langlois as one of the most important figures in the history of film.

Jacques Richard has made a film big and grand enough to accommodate his outsized subject.

In all his fanatical rotundity, the rumpled Langlois (1914-1977) was the epitome of a film nut.

Filmmaker Jacques Richard's rich package and celebration of all things Langlois and Cinematheque will delight cinephiles and anyone seeking a historic perspective on the liveliest art.

[An] affectionate and uniformly superb documentary.

The film successfully serves as a crash course in the baroque world of French film politics, then and now.

A treat for anyone who's passionate about films or who's ever wanted to learn more about them.

The whole project, however conventional, has the allure of a communal embrace, a home movie of a motherland left irrevocably in the past.

Audience Reviews for Henri Langlois: The Phantom of the Cinematheque

[font=Century Gothic]"Henri Langlois: The Phantom of the Cinematheque" is a rambling, informative documentary about Henri Langlois(1914-1977), legendary founder and director of the Cinematheque Francais who saved countless films from destruction, sometimes under semi-heroic situations. The Cinematheque showed countless older films that could not be seen elsewhere, providing a first class education in cinema to future filmmakers especially French new wave directors like Francois Truffaut and Jean-Luc Godard. (Even in this day of the DVD player, I still prefer seeing a movie in a theatre whenever I have the chance.) The documentary mostly consists of archival footage and interviews with collaborators. Overall, it illustrates perfectly why we need people like Langlois to preserve film and educate young cineastes. If the movie has a fault, it is perhaps too one-sided and does come perilously close to conspiracy theories at times.[/font]

A good documentary about the greatness of Cinematheque co-founder Henri Langlois. I always knew the influence of the Cinematheque on the French New Wave filmakers, but this film shows how Langlois ran it and what films he re-introduced to the public. This was obviously made for French television and I would like to see a slower paced and more in depth documentary on Langlois and the Cinematheque.The doc. goes into how he saved films from the Nazis, American and European studios from being destroyed. He was the first film preservationist and collected movie memorabilia from the first 50 years of film. It goes into how he got films and would show a film only once every 10 years or so.The film also goes into Langlois struggle with the government and lack of funds. The Cinematheque must have been amazing in it's heyday. Langlois received a Honorary Oscar in 1974 for his preservation efforts and reintroduction of forgotten films.

Henri Langlois: The Phantom of the Cinematheque Quotes