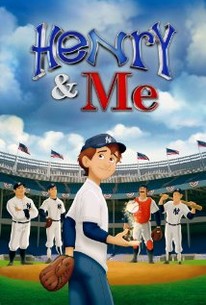 Henry & Me tells the courageous story of Jack (voice of AUSTIN WILLIAMS), a brave young boy who is dealt a life changing blow. Low on confidence and filled with self-doubt, hope seems lost until a mysterious stranger named Henry (voice of Golden Globe (R) winner RICHARD GERE) appears. With the touch of his pin, Henry sweeps Jack away to a magical world where illness no longer exists and New York Yankee legends play forever. The incredible journey brings Jack face to face with Babe Ruth (voice of Academy Award (R) Nominee CHAZZ PALMINTERI), Thurman Munson (voice of Grammy Award (R) winner PAUL SIMON), Lefty Gomez (voice of LUIS GUZMAN) and Mickey Mantle (voice of DAVID MANTLE) - who all teach Jack to face his fears and never give up. The movie climaxes at Yankee stadium, where Jack must test his newfound courage to save the season and find his way home. Featuring an all star-cast of unforgettable characters, Henry & Me is heartwarming movie experience for the entire family with a message of hope... when life throws a curve... swing away!

Critic Reviews for Henry & Me

Henry & Me is a heartwarming tale that should prove irresistible to young baseball fans.

It's difficult to carp at a film that offers a positive message to children in need of hope and courage.

The Yankeeness of it all is a bit much.

it was sweet and... I thought it had a nice message about not giving up.

Audience Reviews for Henry & Me

There are no featured audience reviews yet. Click the link below to see what others say about Henry & Me!