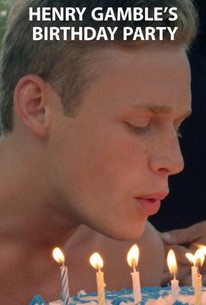 Two teenage boys, preacher's kid Henry Gamble (Cole Doman) and his friend Gabe (Joe Keery), have a sleepover the night before Henry's seventeenth birthday pool party. Typical teenage boy chat quickly turns sexual, and it's silently implied that Henry, on a search for identity, has a crush on Gabe. As dawn arrives on the day of the party, Henry's mom Kat (Elizabeth Laidlaw) wakes in a state of limbo, middle-aged, with a secret. A little while later, Pastor Bob (Pat Healy, CHEAP THRILLS) is making breakfast, and they are joined by Henry's 19-year-old sister Autumn (Nina Ganet), home from college for the party. Later that afternoon, as guests arrive - both from the church, as well as Henry's own "secular" friends - and day turns to night, Henry carefully navigate the religious strictures and sexual secrets of his community, as do the adults and teenagers of the party, all struggling to tread the public and private, and their longing, despite themselves and their faith, for earthly love.

Cone-himself a preacher's son whose features generally explore Christian milieus-doesn't condescend while tracing the moment when faith becomes an obstacle to self-realization.

Cone, the son of a Southern Baptist choir director, has by no means made a faith-based movie, but he's made one that treats faith seriously and without condescension.

"Henry Gamble's Birthday Party" feels sincere but not accomplished, empathetic but not deep.

Cone, who is bighearted toward but not uncritical of his Bible-thumping characters, has a keen sense of seemingly incongruous details ...

The acting is so naturalistic and the various subplots are so well balanced that the confused piety of the characters gradually begins to feel like anyone else's everyday problems.

It's a film that's not without its issues, but it displays a sensitivity that more films (indie and otherwise) should try to emulate.

...Stephen Cone has created a plethora of engaging and authentic characters, and much of the film rings true.

[Stephen] Cone's nuanced script and his sure touch with his actors...is always a pleasure to bask in, as are many of the naturalistic performances.

...carves out a truly unique space in the gap that exists between agnostic Hollywood filmmaking and church-funded, faith-based indies.

An enjoyable, but unconvincing look at religious hypocrisy and Christianity's struggle to accept changing social norms.

Where is love? Within a brightly appointed suburban home, the spirit and the flesh: every character is alive and so gently fearful of what moment may pass after this one. Tone matters... Bright, bumptious and loving,

A chance to probe evangelical Christianity, with all of its contradictions and intolerance, by someone definitely in the know is blown here by an undue emphasis on melodrama.

There are no featured audience reviews yet. Click the link below to see what others say about Henry Gamble's Birthday Party!