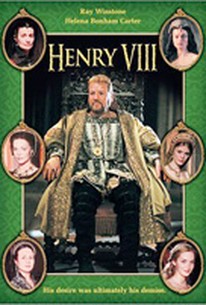 The life of one of Great Britain's most influential and feared monarchs is dramatized in this lavish production, originally produced for British television. King Henry VIII (Ray Winstone) is a shrewd but ruthless ruler who is determined to sire a male heir who will succeed him on the throne. However, his wife, Catherine of Aragon (Assumpta Serna), after numerous attempts, is only able to bear him a daughter, so the king takes a mistress, Anne Boleyn (Helena Bonham Carter), in hopes she will give him a son. Anne Boleyn cleverly insists that she must wed the king if they are to have a child, and when the Catholic Church forbids Henry's request for a divorce, the king responds by forming his own denomination, the Church of England, which he will oversee himself. One of the king's most trusted advisers, Cardinal Wolsey (David Suchet) attempts to convince Henry that this is folly; Henry sentences him to death, and sends him to the Tower of London to await his sentence. Despite these machinations, Anne Boleyn is unable to give Henry the son he wants, and the king decides she will pay with her life for this failing. As Henry becomes increasingly ruthless in his dealings with those close to him -- as well as other nations -- he leaves a bloody wake as he uses beheading as his favored means of dealing with troublesome wives and untrustworthy allies. The cast also includes Sean Bean, Charles Dance, Emilia Fox, and Emily Blunt; Henry VIII first aired in the United States as part of PBS's award-winning anthology series Masterpiece Theatre. ~ Mark Deming, Rovi

There are no critic reviews yet for Henry VIII. Keep checking Rotten Tomatoes for updates!

Good production design and fine performances but the story is too vast to be told in three hours. Stick with the 70's English miniseries starring Keith Michell instead.