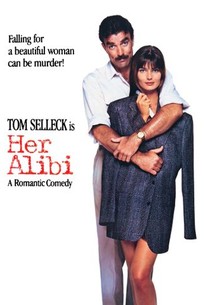 A frustrated writer helps save a woman being railroaded by the law -- or is she? -- in this comic mystery with romantic overtones. Phil Blackwood (Tom Selleck) is a best-selling mystery novelist who has run into a bad case of writer's block. Hoping to find inspiration for his next book, Phil goes to the city courthouse and witnesses the arraignment of Nina Ionescu (Paulina Porizkova), a beautiful Romanian immigrant who is accused of killing a man with a pair of scissors. For Phil, it's love at first sight, and after sneaking into jail disguised as a priest, he makes her an offer. Phil offers to let her stay at his house, and he provides her with an alibi -- she can claim that she couldn't have committed the crime, because she was with him at the time of the attack. Nina agrees, but after Phil encounters a handful of dangerous foreign agents, Nina's acrobatic parents, and a highly suspicious district attorney, he begins to wonder if Nina might have committed the murder after all. Her Alibi also features William Daniels as Sam, and James Farentino as Frank Polito; the song "Falling In Love" was written and recorded for the film by Randy Newman.

Leonard Auclair
as Jack the Author

Dick Harrington
as Henry the Neighbor

Hank deLuca
as Ian the Editor

Joann Havrilla
as Woman at Lecture

Joey Perillo
as Clown
View All

Critic Reviews for Her Alibi

There's no excuse for Her Alibi. It inspires oceans of sympathy for Tom Selleck, who seems a nice guy and doesn't deserve to be lumbered by the ineptness of this enterprise.

He's a mystery writer, she's a mystery; and it's also a mystery how TV fodder like this manages to get the high-gloss, top-talent treatment at studios.

The plot is ludicrous, which in itself would be perfectly acceptable given sharper handling, but both script and direction devote so much time to romantic undercurrents that the central intrigue is further divested of credibility.

A romantic melodrama of a boringness to make your average tooth extraction seem preferable.

Watch it with the sound off to see two pretty people and miss the dumb plot.

...an entirely disposable endeavor that's rightly fallen into obscurity in the years since its release.

It has a grand total of four genuinely funny moments, most of which are shown for free in the TV commercial.

Her Alibi veers with little purpose from bland drama to heavy-handed slapstick, with rhythm, characterization, and plotting better suited to television than the movies

Her Alibi is a trifling confection, a near-invisible farce, cinematic pocket lint. That's not to say that it's a terrible movie; cake icing certainly isn't a terrible food.

Audience Reviews for Her Alibi

Very funny Tom Selleck Movie. :) I liked it alot & there was alot of hilarious parts as well. :)

Another forgettable chapter in Tom Selleck's film non-career. Allegedly comic mystery in which he supplies a beautiful stranger with a fake alibi and we try very hard to care.

Thriller writer Selleck provides an alibi for beautiful murder suspect Porizkova, only to wonder if he's next for the chop.