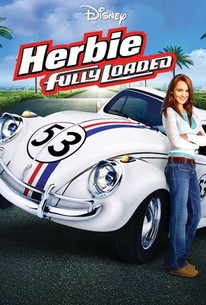 The world's wackiest Volkswagen is back in action in this action comedy. Maggie Peyton (Lindsay Lohan) is the 18-year-old daughter of Ray Peyton Sr. (Michael Keaton), a once-successful stock car driver whose career is not what it once was. Maggie loves racing and is in line for a job covering NASCAR for ESPN, but in her heart she'd rather be behind the wheel, even though her father strictly forbids this. For Maggie's birthday, Ray takes her out looking for a used car, and she finds herself strangely drawn to a wrecked 1963 Volkswagen in a salvage yard. Against Ray's better judgment, Maggie gets the car, and a note in the glove box tells her the rust bucket is named "Herbie," and he can help her solve her problems. To her surprise, the message turns out to be true -- with a little TLC, Herbie is running like new, and after showing his stuff in a street race, Maggie persuades her naysayer dad to take her and her VW on as part of his racing team. Herbie: Fully Loaded also stars Matt Dillon as rival racer Trip Murphy, Breckin Meyer as Maggie's brother (and fellow struggling driver) Ray Jr., and Justin Long as Maggie's friend Kevin. ~ Mark Deming, Rovi

Allen Bestwick
as Himself

Benny Parsons
as Himself

Jimmie Johnson
as Himself

Dale Jarrett
as Himself

Tony Stewart
as Himself

... a winning combo that could herald a new lease of life for this surprisingly resilient franchise ...

The movie is savvy enough to toy with these conventions and wacky enough to take a few risks, and it adds up to a fair enough matinee diversion, much like its predecessor.

Its vibrating crowd scenes and splashy visuals will please the seven-to-12 set.

I guess that wacky little car might amuse small children, but the special effects are surprisingly weak, the story is beyond clichéd and the attempt to wedge the hot NASCAR scene into the movie is just clumsy.

It's a gateway to advanced consumerism, with entertainment as a secondary concern.

Yet, with all the frowning and moping and general droopiness going on, you'd think Lohan and company were performing War and Peace, not a lighthearted Disney racing comedy.

Gets off to a promising start before becoming just another by-the-numbers family film that fails on every level imaginable.

There's an easy confidence about the project.

This new extreme installment of Disney's "Herbie" franchise is an attempt to resuscitate the property when it should have stayed long dead.

Herbie: Fully Loaded. What? Why am I writing this? Oh, yeah, I did watch it yesterday. Well, one big star for Lindsay Lohan. Any movie she's in is a minimum one-star baby. The problem, however, with watching a Lindsay Lohan movie is that I tend not to notice anything else that's going on. I think I should subtract one star for this, but you know what? I'm actually going to add one more because of this. Okay, I vaguely remember that this was about a car and racing. A VW, right? They're going to stop making the latest incarnation next year, 2020, I believe, so it's nice that any kind of VW, even if they might be produced by the descendants of Nazi's who migrated from South America to Mexico, deserves one star. No, wait, minus one star for anything having even the whiff of Nazis. Don, Nazis bad, okay? Just say it. And watch out for a Nazi caravan. Well, I guess it's just two stars even though Lindsay Lohan is in it. Ah, but she had me in thrall as usual. One more star = three.

They worked very hard on bringing the magical presence of Herbie back after so long, the actors however weren't as magical. I didn't like it but I didn't hate it either.

Not a bad movie, a cool addition to the series, and Linsey Lohan was a good pick as the main actress, but still a very boring and cheesy film.

Really enjoyed this film! Herbie is a classic! The remake of this has to be as good as the original although I haven't seen it.